MY OWN CHOICE: FOOD FOR THOUGHT AND STOMACH

Like life, food should be varied. I love the Seasons brunch at the Sofia Hilton, phone: 933 5062, especially if it is wet outside. But if it isn't, I like to travel restaurant to restaurant. And I keep repeating to myself what Samuel Johnson once said: "A cucumber should be well-sliced, dressed with pepper and vinegar, and then thrown out."

I start at what is called confusingly the Tomas Garyk Masaryk Czechoslovakian Club in Sofia (15 Krakra St, phone: 944 1383). No country by the name of Czechoslovakia exists nowadays, but the club's management is conservative in terms of both name and food. The setting of this very old Sofia eatery has hardly changed since the 1970s, and neither has the fare. You can have some standard Czech concoctions of the Svickova - type, but I come here for the very Bulgarian meatballs, probably the best this side of the Balkan Mountains. There is Staropramen on tap, but unfortunately it is the 12 percent variety, and not my favourite Desitka, the 10 percent that the Czechs in Prague drink. Call Rumen or Biser in advance to make a reservation as it can get crowded, especially on Fridays.

For a more sophisticated assault on the palate I go to L'Etranger, the French place (yes, run by a real Frenchman) not far from Vagabond's offices (78 Tsar Simeon St, phone: 983 1417). Olivier gives me some homemade apricot brandy produced by his Bulgarian in-laws, or sometimes I prefer a sip of Pernot. Olivier's escargots are unrivalled, which makes it very difficult to decide on the hors d'ouvres, as the duck pate creme brulee, a culinary gem, is fivestar. Significantly, at L'Etranger you pay Bulgarian prices for French grub, which is preferable to paying Parisian prices for Bulgarian run-of-the-mill. I have spotted royals and prime ministers doing the same.

If I drive to the southern Black Sea coast, which is rather uninspiring in gastronomic terms, I stop at Karlovo, almost midway between Sofia and Burgas on the E3. Edno Vreme, or "Once Upon a Time" (9 Rakovska St, phone: 0335 950 19, 0888 817 066) is in a 19th Century house and consists of inside and outside dining areas and a porch. In October you must call Ivan, the manager, to book the porch. Everything Edno Vreme does is excellent, especially their salads (seasonal), their bread (rosemary), and their Anasonliyka. The latter is a wild plum brandy liberally seasoned with aniseed. It is made according to an old local tradition. Trust me. Absinth tastes like diluted lemonade in comparison.

On the way back from the southern Black Sea coast I take the muchmore congested Stara Zagora road solely in order to stop at the Pazardzhik Shell garage. I may or may not fill up the car there, but I certainly fill up my insides. What better way to round off a trip to the seaside than to rub shoulders with the TIR drivers hanging out drinking Turkish tea at Nedzho's (phone: 0899 154 761). To get to it, drive carefully through the lorry park to the left of the garage. Enter, and you could be in Diyarbakir, only the kebabs are better. And the home-baked bread is about two feet square. Delicious and nutritious.

If I happen to be in the Bansko region, where you may well be this coming winter, I go 30 miles south to Ognyanovo. From there it is only a short drive to Leshten, a popular hangout for Bulgarian moviemakers and the progenitor of "rural tourism" in Bulgaria. The unnamed eatery in the middle of the village (phone: 0752 75 22, 0888 544 651) offers both fantastic views to the Pirin mountains across the Mesta Valley, and very good food. Try the rissoles made of chopped rather than minced pork. In October you may still be able to sit outside. If you have one drink too many, as you probably will because your simple but delicious lunch will have to be washed down amply, get someone to drive you back to Ognyanovo and take a dip in the natural open-air hot-water swimming pool there. Immerse yourself in the hot water, while you feel the gentle autumnal rain, and you will heal both your body and your soul. 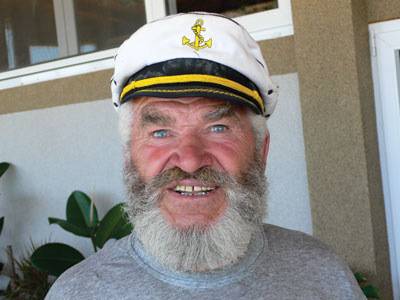 In Shabla, at the opposite corner of Bulgaria, I never miss Bay Pesho Gospoda, or Uncle "God" Pesho (phone: 0888 221 771). God's wife is called Mariana and she makes a fish soup with a red paste accompaniment that may be eaten on slices of bread in lieuof a main course. And God's sprats, which he calls catal kuyruk, are deboned, each and every one of them! Divine treatment and an almost 180° panorama of the northern Black Sea coast, with the compliments of God!

Wherever you go, whatever you do, please remember Dr. Johnson and his cucumber along the way: "He who cares not for his stomach can hardly care for anything else at all."

Read 4492 times Last modified on Tuesday, 15 March 2016 14:42
Published in Vagabond Features
More in this category: « MY OWN CHOICE: EATERIES THAT STAND THE TEST OF TIME DESERVE FAITHFULNESS MY OWN CHOICE: PASSION FOOD »