by Nikolay Veselinov; photography by BTA
Rate this item
(0 votes)

Bulgarian footballers abroad earn outrageous salaries and are the stars of their teams, yet when they play for the national team they fail to score

"Whatever happened to the 'Golden Guys'?" This was the question we were all asking ourselves when the Bulgarian national team was knocked out in the qualifying rounds of the 2004 European Championship in Portugal. The memory of the Golden Guys' fourth place finish in the World Cup in the United States a decade earlier was still fresh in everyone's minds. There were also new headlines reporting the record breaking transfer fees and salaries paid out by clubs like Bayer Leverkusen and Tottenham Hotspur to those very same footballers who had dropped the ball in Portugal.

Indeed, these new Bulgarian footballers are talented - as long as they play for a foreign club. But once they don the national jersey, the chances of them scoring a goal become slimmer than the chances of finding a free seat on the Tube during rush hour.

26-year-old Dimitar Berbatov's pair of lushly lashed blue eyes has made him a sex symbol; his weekly salary of ?30,000 from Tottenham has made him a rich man. He is a remarkable striker, and when he's on form, he is a wonder to behold. For that reason, his former team pocketed a cool 16 million euros for him - a record amount for a Bulgarian footballer. Not even the legendary Stoytchkov himself came with such a hefty price tag. But despite this, "Beautiful" Mitko cannot compare with the old master. As captain of the national team, Berbatov was not able to score a single goal in the Euro 2008 qualifiers against Albania or Holland. Nor has he led his club to victory in any championships, offering a weak performance at the Euro 2004.

Berbatov is not the only Bulgarian footballer to have surpassed Stoytchkov's transfer fee. Left winger Martin Petrov - Bulgaria's MVP for 2006 - was transferred to Manchester City from Atletico Madrid for ?4,700,000. In 2005 forward Valeri Bozhinov left Lecce for Fiorentina to the tune of 13 million euros. He is now with Manchester City, but due to injuries and his tumultuous love affair with the folksinger Alicia (the two are now married and have a son) his performance has not been particularly impressive.

Any list of successful Bulgarian footballers abroad should also include Svetoslav Todorov, who played for Portsmouth a few years ago, and last but not least, Radostin Kishishev. At 33, he is already rapidly approaching the sport's usual retirement age, but he is nevertheless still valued for his dedication and gusto on the field. His by-no-meansshabby biography includes games for Charlton, Leeds and Leicester.

Bulgarian footballers playing for German clubs are few and far between, but well-respected, if only because of the Golden Guys, who eliminated the German national team from the 1994 World Cup. 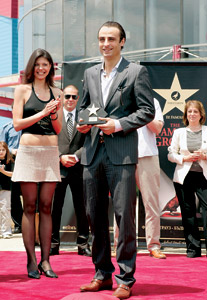 When Krasimir Balakov (himself a Golden Guy) officially bid farewell to football, Stuttgart fans packed the Gottlieb Daimler Stadium to wish him well. He continues to live on in their memories as one of the most intelligent and hard-working foreign midfielders ever to play in Germany. The name of Mariyan Hristov may be fading from the Bulgarian memory, yet he remains the only Bulgarian Bundesleague champion, a title he earned in 1998 along with his Kaiserslautern
teammates.

Bulgarian footballers also play in France and Spain, and especially Turkey, where they frequently join the ranks of second-string teams such as Kayserispor, Samsunspor and Gaziantep.

For a small country of seven million or so, Bulgaria hasn't done so badly on the international football scene. Why is it, then, that when Bulgarian footballers play for the national team, these stars can't even manage to beat Albania in the Euro 2008 qualifiers? Why do they seem haunted by a strange internal compulsion to be shut out by Sweden, losing match after embarrassing match by anything from three to five goals? How can we possibly account for their six-nil defeat by the Czech Republic in 2001, a humiliation surpassed only by the Bulgarian national youth team, which succumbed eight-nil to the same rival?

Talk to any football fan and you'll hear plenty of explanations for this phenomenon: "Five fans, 10 opinions," as the Bulgarian saying goes. 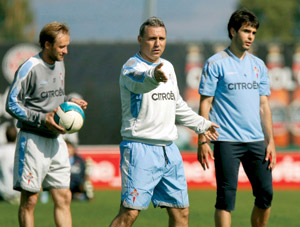 All-time favourite: When Bulgaria beat Germany in 1994 the roaring public demanded “Stoytchkov for president!”; Itso “Dagger” Stoytchkov, however, failed as national team coach in the 2000s

Some claim that the stars are, in fact, not really stars at all; others admit that stars exist, but argue that they fall prey to their own prima donna-ism. Theories of insufficient motivation, insufficient patriotism and insufficient pay are also often bandied about.

Yet there is one opinion that they all share almost without exception: the true culprits behind these defeats are the referees. The coaches also appear to be part of the problem. Stoytchkov was a disaster at the job - in the end the Bulgarian Football Association was forced to replace him with Dimitar Penev, the very coach who led to the team to victory in the semi-finals in the United States.

Perhaps we can chalk it up to a generation gap. It may really be true that players such as Hristo Stoytchkov, Emil Kostadinov, Trifon Ivanov, Bobi Mihaylov and Nasko Sirakov only come along once in a century.

But the real explanation is most likely political. When Stoytchkov and his teammates achieved their victories in the United States, Bulgaria had only recently shaken off the heavy yoke of Communism. Bulgaria - along with the other countries from the Soviet bloc - was taking its first baby steps into the arena of international politics. The idea that they were representing a new democracy to the world inspired Bulgarian footballers, who considered themselves ambassadors of the new political movement.

Martin Petrov was Footballer of the Year 2006

Today, whatever its faults may be, Bulgaria is no longer in need of such diplomacy. Money has replaced politics as the footballers' main motivation; thus, while they still hold Bulgarian passports, they now consider themselves citizens of the world. And in this era of globalisation, a fat salary is one of the best measures of success.

The difference between these two trains of thought was particularly striking at a fund-raising match between "the old national team" and "the new national team" at the Bulgarian Army Stadium in 1999. Despite their thickening waistlines and receding hairlines, the heroes of 1994 managed to soundly trounce the "new guard" five-two.

This explanation, if true, is quite depressing. The Bulgarian national team seems unlikely to see the equivalent of Ryan Giggs anytime soon. For 17 years, this legendary player has been the superstar of Manchester United, raking in millions. But because he was born in Cardiff and has refused to give up his Welsh citizenship, Giggs has never sported the English national jersey on the playing field. Instead, he is a member of the Welsh national team, a team that he will never lead to any international victories.

Yet the team's utter lack of any prospects for glory has not caused Giggs to shirk his duties. Until his very last game for the national team, he gave his all on the field, without any squabbling over money, the captaincy or which position he would play. Giggs is not the only such example; other players who return to help their humble home teams include Ivan Zamorano of Chile, Hugo Sanchez of Mexico, Mark Viduka of Australia and Roger Milla of Cameroon.

It seems that Bulgarian footballers have yet to learn the first rule of democratic sport: a player's performance in competition should not depend on the amount of money he receives for it. In the alchemy of athletics, this is the only way to become "golden".