IN A TRUE SPIRIT

If you have been to Sofia's Chepishev Restaurant in the Boyana district, you must have seen them. No one could fail to notice over 1,500 bottles displayed behind glass, on two floors. You don't have to be an expert to appreciate the sheer number and the diversity – bottles from 1906 and 1937 stand alongside Japanese whiskies and whiskies in china decanters. The collection, the largest in Eastern Europe, belongs to Plamen Petroff, a youthful 51-year-old whisky connoisseur. It is the result of a passion that changed his life overnight.

Ironically, Plamen Petroff, known to his friends and colleagues around the world as “Whiskyman” Plamen, is not a great fan of drinking – despite, or rather because of the fact he has worked in the restaurant and hotel business all his life. In reality, he only drinks alcohol at whisky
tastings. “I have tried over 700 brands,” he says modestly. However, it takes much more than that to become a world whisky expert. “Whisky is magic, nature and science, and it takes passion and many years to master it.”

It all started in 1993 when Plamen embarked on his first business venture and opened a restaurant. After 35 years experience in the catering business he had stocked his bar well. So much so that one night when a group of Scots came in for a drink, they could not believe their eyes. They were the United Distillers team who were starting their business in Bulgaria. “One of them gave me a book, Michael Jackson's Whisky Companion. I started reading it only to find out how little I knew about whisky.” Once he realised this, he moved quickly. “I sold my flat, furniture and car, and I went to study whisky in Scotland and the United States. I have not stopped learning since.”

Plamen's passion and research has taken him to 86 distilleries in Scotland, all the distilleries in Kentucky and Tennessee, two in Canada, and two in Japan. In addition, he has a collection of over 200 books on whisky, and intends to write one of his own. He attends whisky festivals around the world to get first-hand knowledge of innovations in the whisky business and is in regular contact with whisky experts and writers from around the world – a society of about 40 people worldwide. He proudly calls two of its most famous figures, London-based Sukhinder Singh and John Milroy, his teachers. And what he learns, he passes on: he regularly writes about whisky and takes part in tastings and events
dedicated to whisky. 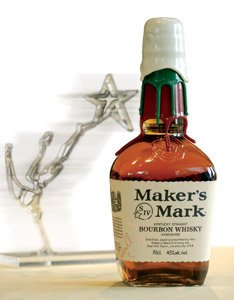 Ask Plamen about the highlight of his career and he'll give the date 23 April 2007. “I became a member of the Keepers of the Quaich, the exclusive society dedicated to Scotch whisky. The organisation, founded in 1988 by the top five distillers, honours those around the world who have contributed to the promotion of whisky.”

The ceremony in Blair Castle, Scotland, made a kilted Plamen both happy – it was recognition of his efforts to promote appreciation of whisky – and proud. Fellow Keepers of the Quaich include Prince Charles, other members of the royal family, company presidents and master distillers, and they all stood up to welcome him.

Meanwhile, Plamen has become a collector as well. Collecting whisky is a relatively new hobby on the world stage, only taking off in the late 1980s. “The first time I went to a Christie's whisky auction in 1996, there were 60 people, the following year there were 300, and now about 3,000 people visit.” 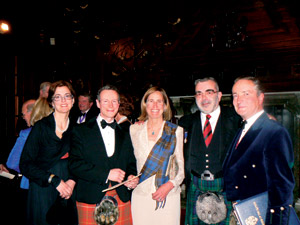 What is the most expensive item in his collection? Plamen won't say. “I have bottles which I bought for five to six thousand pounds but I'd rather not name them,” he says. Clearly, there are many valuable bottles on those shelves.

Some of them easily catch the eye – such as the porcelain decanters housed on the restaurant's second floor. Plamen is the sole possessor of eight Wild Turkey Kentucky Bourbon porcelain decanters produced in 1971-1978. The ninth, which never reached the retail market, is also in his possession, in addition to dozens more of game birds of the same brand.

If you look closely, you may see The Macallan Royal Marriage, which Plamen bought at an auction at Christie's in Scotland, in 1995. It was made from a mixture of two barrels from 1948 and 1961 and bottled in 1981 in commemoration of the royal wedding of the Prince of Wales and Lady Diana Spencer. Or the nearby Macallan dedicated to the 200th Anniversary of the French Revolution. Or the limited series Macallan for the 500th Anniversary of Scotch whisky: 1,494 were produced, No 1 went to Queen Elizabeth, and United Distillers gave No 111 to Plamen.

Petroff also possesses a bottle of Royal Lochnagar whisky signed by Prince Charles, of which there are only 150 bottles in the world.

There is a Laphroaig, signed by Bill Burgis, William Teacher's greatgrandson, as well as a Jim Beam Distillers Masterpiece, a present from Booker Noe, the great-grandson of Jim Beam. 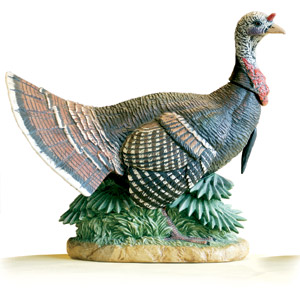 Not your usual Wild Turkey: The 1995 Baccarat Crystal decanter is one of “Whiskyman” Plamen’s most treasured bourbons

A true whisky lover, Plamen has many tales to tell about most of his bottles. But a reference to whisky on the rocks as seen in many Bulgarian bars makes him pause, raise an eyebrow and then smile. “Malt whisky on the rocks is typical of ignorance, but now a growing number of people drink their whisky at room temperature in a tulip-shaped glass,” he says. His frequent appearances in the media – explaining the art of drinking whisky – has contributed to changing attitudes.

Plamen has staged a few whisky dinners for friends, fashioned after a dinner he attended in 2003 at London's Savoy Hotel, where all the courses were cooked and served with Aberlour whisky. “The best accompaniments to whisky,” Plamen adds, “are a good cigar, Colombian coffee, black chocolate and fruit.”

Macallan, Ardbeg, Glenmorangie, Springbank, Lagavulin, Balvenie, Talisker, Highland Park, Laphroaig and Maker's Mark are Plamen's top 10 whiskies and he says proudly: “What matters is you can taste them all in Bulgaria now.” 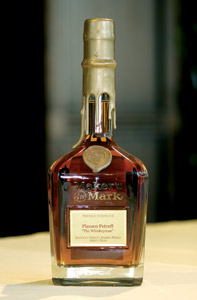 Where? There are a couple of places. One is the Enoteca Uno Restaurant where every evening after dinner Plamen personally offers patrons a glass of whisky and a cigar. The other is the lobby bar at the Downtown Hotel – the 250 brands there are of Plamen's choice.

Plamen's hobby is yet to turn into a business. He still owns no apartment. But the whisky expert finally ventured to import a limited amount of no less than 262 high class brands of whisky last month – to test the market. Look out for them in good hotels, restaurants and shops and you will have a dinner accompaniment recommended by a Keeper of the Quaich.