THE DAY OF THE LION

On 19 February every year many Bulgarians gather in central Sofia, in the square encircled by the Serdika Hotel, the Foreign Art Gallery and the Faculty of Journalism. If you happen to be in the area you will probably be confronted by strict security as President Parvanov will be in attendance, standing before a line of elite troops and laying wreaths at a small monument in the middle of the square. A class or two of school kids will also be paying tributes in the freezing cold, and Ataka's leader Volen Siderov will probably be spearheading an alternative rally in one of the side streets.

You may be wondering what this is all about. No, it is not yet another celebration of Bulgaria's accession to the EU, nor is it yet another protest against the early closure of the Kozloduy Nuclear Power Plant. It is about Levski, the man whose figure, to a much greater extent than anyone else in Bulgarian history, has been blown up to larger-than-life proportions - a sacrosanct deity emblematic of what the Bulgarians have always wanted, but have rarely been able to achieve.

Still wondering? By now you have probably heard of the Levski football team (its most remarkable matches recently were its defeats by Chelsea in both Sofia and London) and may have been pondering where the name comes from. Levski, or "Lion," was a 19th Century revolutionary, your Bulgarian friends have told you, a true patriot who selflessly sacrificed his life to liberate us from the Turks. A man whose moral virtues and integrity were so high that no one that came after him could hope to surpass him. 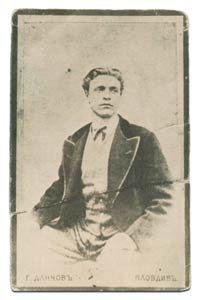 A rare photograph of Levski, in Plovdiv

The life story of Vasil Ivanov Kunchev, who was born in the small Balkan town of Karlovo on 18 July 1837 and was hanged by the Ottomans in Sofia on 6 February 1873*, is remarkable in itself. But what is it that has turned him into the venerated "Apostle," about whom poems and songs have been written, and the mention of whose name leaves few Bulgarians unmoved even 130 years after his death at the gallows?

In the middle of the 19th Century, Vasil Levski was both the typical Bulgarian small-town lad, raised by a widowed mother pressed by poverty and destitution, and the high-flying teenager whose ideas of life differed radically from those of his contemporaries. Most of them wanted to get a job that would provide a comfortable existence under the Ottoman authorities. He didn't.

Initially, Levski toyed with the idea of becoming either a priest or a doctor, and in 1855 settled for the former. As a start, he became a monk in 1858, but soon discovered that the St Spas Monastery in nearby Sopot was "too stuffy for his soul." Just three years later he would abandon the Church to become a professional revolutionary. Like many other champions of the Bulgarian national cause he would go into exile, joining in the first instance Rakovski's Bulgarian Legion based in Belgrade.

According to legend, the nickname Levski dates back to this period and stuck with Kunchev after he jumped "like a lion" during drills. Another version relates the nickname to 1867, when Levski went into battle "like a lion" as part of Panayot Hitov's notorious incursion into Ottoman territory.

*The Bulgarians at that time made date calculations according to the Gregorian calendar. The proper dating in the Julian calendar would be 18 February, but because of a mix-up, the celebration of Levski Day would be held one day later, on 19 February

At the time, Rakovski's plan, along with that of most other exiled revolutionaries, was to overthrow the Ottoman rule by organising armed raids into Bulgarian lands in the hope that these would prompt a massive uprising inside Bulgaria. Most of the raids failed, however, partly because the Bulgarian irredentists were badly trained and armed in comparison to the Ottoman regulars, and partly because the local population preferred to go along with the status quo and had little interest in guerrilla activities. 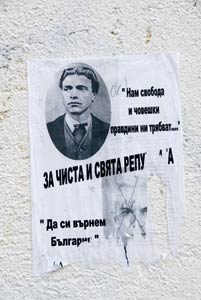 Ultranationalist Volen Siderov has used Levski as part of his 2006 presidential campaign. On the poster: Levski and Siderov

Levski would soon see that ruffling the feathers of the Turks would only invoke violent retaliation, so he changed tactics, deciding to set up a revolutionary organisation within Bulgaria proper. In 1868, sponsored by Bulgarian expatriates, Levski set out on what would be a series of trips to establish the clandestine organisation. Over the next few years he would set up a network of cells of like-minded Bulgarians throughout what, at the time, was the northernmost province of the Ottoman Empire. Many of those would remain dormant until activated by the central command (Levski himself became the chairman of the Bucharest-based Bulgarian Revolutionary Central Committee in 1872). In the meantime some would engage in local raids, mainly on Ottoman convoys carrying money, to raise funds for arms purchases. All this was done in preparation for the grand day when enough support would have been whipped up to start a full-scale revolution.

Interestingly, the strategy of premeditated attacks based on intelligence, hijackings for ransom, and urban warfare would later be picked up by organisations such as the IRA, while establishing loose cross-border networks of "revolutionary" cells has extremely sinister connotations in the world of the 21st Century.

In the case of Bulgaria in the 19th Century, however, it seemed to work, for a time. But at the end of 1872 an ill-advised attack on an Ottoman money wagon led to large-scale arrests of members of the organisation, and Levski decided to flee back to Bucharest. On his way north of the Balkan Mountains he stopped at a village near Lovech in an attempt to save some organisation archives from the Turkish police. He was seized, possibly betrayed by a priest, and brought to Sofia, where he was tried and executed.

Independence for Bulgaria would come just a few years later, the byproduct of a war between the Russian and the Ottoman empires. Levski was obviously a charismatic figure while he was still alive, but charm alone would hardly explain his immense popularity in death.

As early as the 1870s, poets, notably Hristo Botev, were writing odes in his memory, and in the 1890s Ivan Vazov would glorify him as the "Apostle of Freedom," a name that has stuck until today. But the real explanation behind Levski's haloed status lies in the fact that what he said and did was - and is - befitting to a variety of political and moral platforms very much relevant in modern-day Bulgaria.

A wide assortment of figures, including kings, politicians, NGOs, sports functionaries and Volen Siderov, would conveniently overlook parts of Levski's creed, while propagating others that would best suit their own ends. 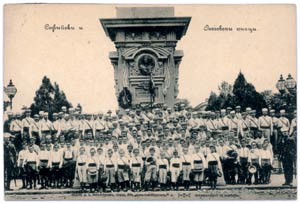 Levski was acclaimed by a succession of royals because in him they saw a justification for their own existence as sovereigns of a Bulgarian nation-state. A series of governments used him as an excuse for their own wars and political repressions. The Communists idealised him because he was a fierce anti-royalist, devoted to establishing a "spotless and saintly republic". Ordinary citizens adored his selfless sacrifice in the name of the nation, which they considered to be at loggerheads with the corrupt politics of the day. And rogues were fascinated by his abilities as a master of disguise, who rarely used the same name twice and who would go undetected by the increasingly infuriated Ottoman police. The Turks in Bulgaria liked him because he maintained that he was fighting against kings on behalf of all the people of Bulgaria, not just the ethnic Bulgarians. And Volen Siderov found Levski a much worthier image to copy than the Hitler that he had tried to resemble at the time of the Bulgarian-language publication of Mein Kampf when he was not yet an MP.

But perhaps even that doesn't fully explain Levski's undisputed status as a Bulgarian national hero. Perhaps he is idealised to such proportions because of a simpler, yet more valid reason. Perhaps "Dyakon", or "Dyakoncheto", or "Aslan Dervishoglu", or "Tropcho", or "Dragoycho" - all names he was known by during his revolutionary
years - exemplify to a greater extent than any what it is that most Bulgarians hold as the primary source of national pride: the ability to outwit internal and external enemies and embark on the road to victory. But then, just when triumph is in sight, you get betrayed by a fellow partner, and die for everyone else's sins. 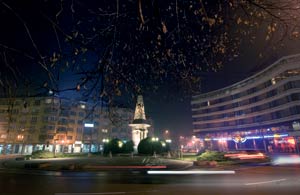 The gallows where Levski was hanged stood in Levski Monument Square, where you have just witnessed this year's rally. In 1873 it was on the outskirts of Sofia.

In 1956 excavations at St Petka Samardzhiyska, the small church in the underpass of the TsUM Central Store less than a mile away, unearthed a well-preserved grave. Researchers ruled out the likelihood it was Levski's grave, but rumours persisted.

In 1986 the Bulgarian Academy of Sciences decided to erect a plaque at the church to mark Levski's grave, a decision that has not been implemented to this day.