LET`S GO FOR A SWIM

by Vera Ilieva; photography by BTA
Rate this item
(0 votes)

On the Orthodox Epiphany, or Yordanovden, Bulgarian men leap into icy rivers, lakes or seas, allegedly for reasons of health and wellbeing

After the suicidal amounts of food and rakiya devoured in Bulgaria from 5 December until 5 January, the indulgence of the festive season will have taken their toll. In order to clear your head for the first working week of the new year, you decide to take a stroll by the water (a river, lake, sea or swimming pool), wishing secretly to dive into it and stay there at least until springtime. While contemplating this, you notice you are not the only one to be thinking this way.

A group of half-undressed Bulgarian men, apparently tipsy and encouraged by a small crowd consisting of their wives and friends, take a headlong rush into the icy waters. A second earlier, an Orthodox priest has thrown a cross into the water and now, obviously pleased, watches the men scramble for it.

Weird, isn't it? You had always thought that the legend of Epiphany was related to the birth of Jesus Christ and his manifestation to the magi - Caspar, Melchior and Balthazar, the three wise men from the East.

"What magi?" scoff your Bulgarian friends in reply to your question about what is going on. "At Epiphany we celebrate the baptism of Christ in the river Jordan when the Holy Spirit appeared in the form of a dove. Come on, we're late for Yordanovden." This is the name day of every Yordan, Yordanka, Dancho, Danka, Bogdan or Bogdana of remotely Bulgarian stock.

How and why this discrepancy between Eastern and Western Christianity regarding the meaning of Epiphany came about, is a question that only a theologian can answer. Most Bulgarians neither know nor care particularly about it. There have not been many creditable Christians in these lands since their Christianisation in 863, probably because religious reformer King Boris I ordered the execution of a considerable number of zealous pagans.

Most Bulgarians don't even know that Yordanovden and the Feast of Epiphany are the same thing, but if you ask them, they will provide all sorts of answers about what the latter holiday marks, ranging from Annunciation to Ascension. 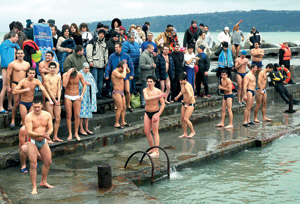 The men diving into the water are not doing this to show how strong their faith is. Some may admit that they had made a bet or had nothing better to do, or wanted to prove they were "real men".

The official explanation, which is supported by the church, claims this is done "for health and wellness". It is said that the man who retrieves the cross will not fall ill during the following year. 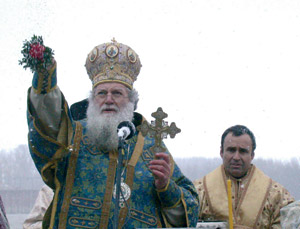 Your Bulgarian friends may try to convince you that this is a "unique" tradition. Don't believe them. The Blessing-of-the-Waters and Retrieval-of-the-Cross rites are practised by most Orthodox Christians. The Greeks who live in Tarpon Springs, Florida, for example, are very enthusiastic about it, but the weather in Florida is usually warmer than in Epirus.

This is the only part of the Bulgarian traditional way of celebrating the holiday to survive modernisation, industrialisation, urbanisation and the Communist regime. Back then, Epiphany was just another name day.

The Communist ban on jumping into cold water because it had religious significance led to a zealous revival during the period of democratic changes, but also to some tragic incidents. In 1995, about a hundred people fell into the icy waters of the river in Elhovo, after the suspension bridge from which they were watching the ritual collapsed. Nine people were killed.

The holiday period around Ivanovden, or Ivan's Day, is one of the jolliest parts of the year for traditional Bulgarian society. The feasts on 5-8 January mark the symbolic rebirth of nature and the nonsymbolic end of sexual abstention which begins on 14 November with the Christmas fast. Because water was a symbol of purity for all preindustrial nations, it plays a major role in these holidays. 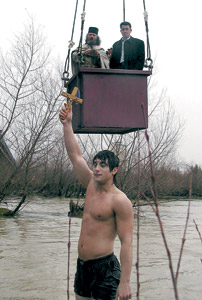 Celebrations start on Krastovden, or the Day of the Holy Cross, on 5 January, when the priest blesses some water, which he puts into copper bowl and sprinkles over his parishioners and their homes. They express their gratitude by putting coins in the bowl and giving the children accompanying the priest wool, beans or flour - modest, but important presents, especially at the end of winter when stores are dwindling. In the evening, Bulgarians eat vegetable dishes and then begin cracking walnuts, trying to predict their health in the new year depending on whether the kernel is good or worm-eaten.

Yordanovden is the time to take a dip. Bulgarians are still advocates of the idea that if you stay in a warm place, especially if it is not draughty, you are guaranteed a long life and good health. However, on this day people who are ill and those whose name day it is enter the waters where the cross has been thrown. 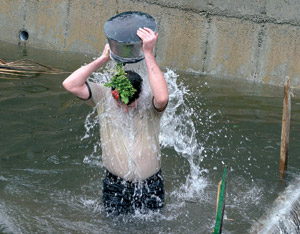 The next day, Ivanovden, commemorates St John the Baptist. On this day, it is merely single men and women, newly weds and the large group of Bulgaria's population whose name day it is that take a dip. There is no escape from celebrating Ivanovden - you are bound to know at least one Ivan, Ivanka, Vanya, Yoan, Yoana, Yanko or Yanka.

The last day of this exhausting calendar period is Babinden, or Granny's Day. This midwives' holiday was one of the rare occasions in the past when Bulgarian women had the chance to enjoy life like their husbands did. They gathered in the house of the midwife who had helped them give birth and, after downing a few drinks, started a horo dance, which continued into the street and meandered all the way to the pub, where they had a few more for the road.

The only thing that has survived from these old traditions is the dedication with which the Bulgarians, irrespective of their gender, get soused on Epiphany - and on Ivanovden the next day, too - in cold water and on liquids with a much higher alcohol content.

So, you'd better face the facts: no Bulgarian you know will even consider doing any serious work before 9 January. Even if you have managed to escape the copious eating and drinking by hiding in a bunker, for example, the rest of this new EU member's population will not have followed suit.

When Jesus was born, the star of Bethlehem may have announced the event, but it was the three magi - Caspar, Melchior and Balthazar - who interpreted the message that God was born. For Western Christianity, Epiphany is related to the manifestation of the newborn saviour in front of the gentiles, represented by the Wise Men from the East. Theologians think that the holiday is basically a modified version of the Jewish Feast of Lights, or Hanukkah.

The holiday which, according to Orthodoxy, marks the only occasion when all three components of the Holy Trinity manifested their physical presence simultaneously to humanity, is also called the Feast of the Theophany. It is related to Christ's baptism in the Jordan. When St John the Baptist cleansed him from the original sin that Jesus carried like all men born of a woman, several things happened. God the Father spoke through the clouds recognising his son, and the Holy Spirit came down from the sky in the shape of a dove. Eastern Orthodoxy chose to celebrate this holiday relatively late: the first reference to an ecclesiastical feast of the Epiphany is in Ammianus Marcellinus in 361.