Bulgaria's Southern border was the deadliest Cold War fortification, a German TV show reveals
Under Communism, more East German citizens were killed at the Bulgarian border while attempting to escape abroad than in all the other Eastern European countries put together. This is the dramatic conclusion that was recently drawn by political scientist Stefan Appelius on the German TV channel NDR. There have long been rumours circulating in Bulgaria about such tragic incidents, but until now no definite details were known about them. The documentary broadcast by the German channel tells the story of Frank Meyer, an 18-year-old German boy who tried to cross the Bulgarian-Greek border into Western Europe illegally, in 1983, encouraged by speculations that Bulgarian borders were not as strictly guarded as those in his country, and the Berlin Wall in particular. He was arrested and, after two unbearable weeks in custody, sent back to the German Democratic Republic, where he was imprisoned for attempted defection. Frank Meyer still shudders at the recollection of what he experienced at that time.

According to Stefan Appelius, Frank Meyer was incredibly lucky. The German scientist's investigations show that the German boy could have disappeared without a trace in one of the numerous nameless graves along the Bulgarian border. A lot of East Germans were shot while attempting to cross the border illegally. Three years ago, Mr Appelius, who is an associate professor at the university in Oldenburg, established that his colleagues had completely neglected this issue and that the general public was totally unaware of it.

He began his investigations in the Federal STASI Records Office, met and interviewed witnesses and received information from Bulgaria via various channels. His findings are summarised in Dead in Bulgaria, a book which is to be published in Germany in a few months. A TV documentary about the East German victims shot dead at the Bulgarian border is also planned.

Like its East European counterparts, the regime in the GDR did not allow its citizens to travel outside what at the time was known as the Socialist Camp. Stefan Appelius says that in East Germany people used to believe that Bulgaria barely guarded its borders and that the country was so poor that it couldn't even afford to buy ammunition for its border guards' guns. So, many East Germans believed this to be an easy option for escape. The reality was often much harsher and the Bulgarian guards and plainclothes acolytes of the authorities showed the fugitives no mercy. 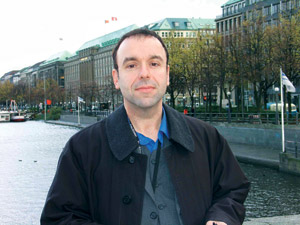 Today, Stefan Appelius is often the only person able to give information about a number of missing citizens of the former GDR. It is only now that the relatives of those missing, who have often lived for decades in the hope that their family members were alive somewhere, are learning the bitter truth, and sometimes the exact location in Bulgaria where the bodies are buried. Most of the graves, however, are unmarked. Relatives' attempts to get information from the Bulgarian authorities after 1989 have failed so far. The Communist security services' files in the country have not been opened and are inaccessible. "Whenever you try to learn something about those times from the authorities in present-day Bulgaria," says Appelius, who often visits the country, "you are immediately faced with an impenetrable wall of silence. What's more, when they notice that somebody has a particular interest in these archives, the documents in question quickly disappear without a trace."

The TV programme and Appelius's forthcoming book draw back the curtain on a terrible truth which until now has been passed over in silence both in Germany and Bulgaria: the killing of civilians at the Bulgarian border before 1989. The Bulgarians are well aware that the number of their own countrymen who fell victim to the restrictive border regime is probably as high as that of foreigners. Finding the truth and calling somebody to account for these acts against humanity is a task that Bulgaria still has to deal with.

As far as the victims from the former GDR are concerned, the German prosecutor will certainly be asked to investigate. Premeditated murder is not statute-barred. Being an EU member now, Bulgaria will have to take a completely different approach to these and other events in its recent history.

Read 6863 times Last modified on Tuesday, 22 March 2016 14:05
Published in Vagabond Features
More in this category: « WHEN GIANTS COLLIDE DOWN THE WATERFALL »