Across the road from the National Gallery in Sofia, there is a plaque on the wall of what is now the BNP bank but was once part of the Grand Hotel Bulgaria. It records that James David Bourchier, the Balkans Correspondent of the London Times, lived there from 1892 to 1920.

At the very end of December he died in Sofia. He lay in state in the cathedral while long lines filed past his coffin. People stood many deep in the streets of Sofia as the funeral procession moved through the city on its way to Rila. There, in a secluded spot above the monastery, Bourchier was buried, a unique honour for a foreigner.

It had been an improbable career. Born in 1850 in rural Ireland, James had attended Portora, now famous as the school of Oscar Wilde and Samuel Beckett. He studied at Trinity College Dublin, with great distinction, and later at King's College Cambridge. For the next 10 years of his life, he worked as a schoolmaster. It was an unhappy period; hopelessly is organised and afflicted by deafness, he was an easy target for his pupils.

These defects do not appear to have impeded his subsequent journalistic career, although contemporaries record with affection the habitual mislaying of his ear trumpet or keys, his turning up late for dinner or playing the piano loudly into the early hours of the morning.

In 1888 he was asked by the London Times to cover events in Romania. From Bucharest he moved to Bulgaria to report on Prince Ferdinand's first tour of his realm. Bourchier never looked back. For the next 30 years, he followed closely events in all the countries of the Balkans. An influential reporter, he came to know personally kings, prime ministers and politicians. As a scholarly commentator, whether writing about exciting new archaeological finds in Greece or contributing articles to Encyclopaedia Britannica, he communicated his love of the region to readers all over the world. 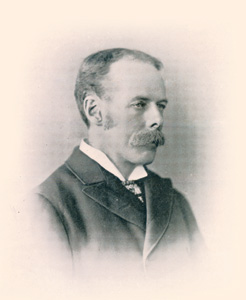 James Bourchier was buried near his beloved Rila Monastery

An indication of the trust he enjoyed can be seen in his involvement in the negotiations that led to the liberation of Crete or his role as an unofficial intermediary in the establishment of the Balkan Alliance between Serbia, Montenegro, Greece and Bulgaria. Equally, his impartiality and uncompromising sense of justice at one time or another offended the authorities of all the countries he covered.

Bourchier failed to predict that Bulgaria would join the Central Powers during the First World War but afterwards he travelled to Paris and sought to defend Bulgaria's interests in the peace negotiations. Few were prepared to listen to him, however, and he returned to Sofia in 1920 a disappointed man. He planned to write and to divide his time between Sofia, Ireland and London, where he had been asked to act as Consul General for Bulgaria, but he died before he could enjoy his retirement.

One hundred years ago, the English-speaking world could read Bourchier's honest and insightful reports. By contrast, today's coverage of the Balkans can be sensational, inaccurate or hostile.

This month the second James Bourchier seminar is being held on 11 May at the Bulgarian News Agency to consider the way Bulgaria is reported in the international media. On 12 May participants will travel to Rila to visit Bourchier's grave and to pay tribute to a great journalist.