text and photography by Nelly Tomova
Rate this item
(0 votes)

The operating table has been disinfected and polished to a shine before the next patient is laid upon it. Dr Sashka Vitanova and her assistant prepare medicine, syringes, and bandages. The assistant holds down the patient, as his claws and sharp beak might be dangerous.

The subject is an imperial eagle, admitted to Bulgaria's only emergency centre for wild animals, in the suburbs of Stara Zagora. It was brought to the clinic with 12 shotgun pellets in its body, although it is illegal to shoot these birds. Part of the soft tissue of a wing is stripped to the bone and the rest is crushed, so it has to be amputated.

The eagle retains its imperial bearing even though it can no longer fly. The staff of the emergency centre will continue to take care of it.

Founded by a few enthusiasts who used to treat birds in their own flats in the early 1990s, the Green Balkans Wildlife

Rehabilitation and Emergency Centre occupies an area of 1.5 acres of land and boasts more than 50 facilities, including a clinic, rehabilitation rooms, a quarantine room, and different sized aviaries. The centre evolved as part of the work of the environmental organisation Green Balkans.

Among its main aims are to treat and rehabilitate injured creatures, mostly birds, and return them to the wild. The centre has a breeding programme to reintroduce rare species into Bulgaria, as well as a policy to educate young people through its environmental work and campaigns.

"There is a lot of work and you must be constantly alert," says vet Sashka Vitanova, who started working here as a volunteer but is now a fulltime member of staff. Nearly 600 wild animals in need of medical care are admitted every year. They have been hit by cars, shot, or injured by electric power cables. Some are young birds that have fallen out of the nest.

When the animals are admitted they are tagged and given a medical file describing treatment, method of feeding and weight.

Birds are brought here from all over the country. Local volunteers, and regional environmental and water inspectors, help transport them to the centre, some even being delivered by regional bus services. 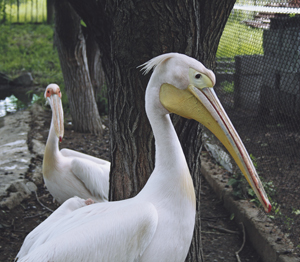 Sashka says "A number of intercity bus drivers already know us well and say things like, 'Here's another patient for you. What happened with the last one?" Sometimes people find a wounded animal and bring it to the centre themselves. Recently, a Sofianite found a wounded owl in the woods and brought it in for treatment. He drove back to Sofia laden with posters and leaflets promoting the centre's work.

Just like a real emergency room, Green Balkans is open for admissions 24 hours a day. The permanent staff is made up of veterinarians Sashka Vitanova and Christina Hristova, and one of its founders, Ivaylo Klisurov, is currently the manager. Dr Slavi Tsekov, who runs several veterinary clinics in Stara Zagora, helps out when there is a particularly complicated operation.

Besides fulltime staff, there are volunteers, many of them foreigners, who are here under the aegis of the European Commission.

Marin is a veteran among them and is studying in the 11th grade of the Veterinary Technical College. He came to the centre out of pure curiosity four years ago. Now he can't imagine what his life would be like without the wild patients and his work in the clinic. Most creatures stay here until they are well enough to be returned to the wild.

Between 30 and 40 percent recover and are reintroduced into their natural habitat. Among them are protected species such as eagles, vultures, falcons and pelicans. Some, however, are so traumatised that they would not survive in the wild, so the centre looks after them and uses them in the breeding programme.

A pink pelican called Gruyo has become a favourite with visitors and an emblem of the centre. Gruyo was brought here more than ten years ago with a shot wing that had to be amputated. Since then he has had a permanent home with a small lake, greenery and even a mate. The staff found his partner for him and she is called, naturally, Gruyovitsa, or "Gruyo's wife."

The bald vulture Pleshka – from pleshivka or "bald-headed" – has lived at the centre for over seven years. She arrived with a broken pelvic bone, which became shorter after the operation.

Vultures are large, heavy birds and can't take off unless they run. As the injuries made that impossible, the staff concluded that the risk of setting her free would be too great. "Three years ago she laid an egg," says Sashka. "She was alone at the time and we realised that she had reached maturity. We married her off two years ago." 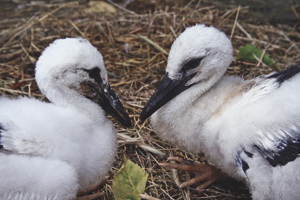 But attempts to create offspring have so far been unsuccessful. The first time, the vulture couple failed to protect the egg and it broke. On the second attempt the embryo failed to develop because it was improperly incubated.

But Sashka is an optimist. "It is normal in nature for a young couple not to manage in the first one, two or even three years," she says. "But we are all keeping our fingers crossed to have a young vulture next year." Bald vultures are protected by Bulgarian law, and the centre hopes eventually to help increase the population through its reproduction programme.

The team has also set itself the difficult task of reintroducing ossifrages to Bulgaria. The bird is a symbol of Bulgarian environmentalism – its stylised silhouette remains on signs designating protected areas. The species, however, was virtually eradicated here in the 1970s, and the last ossifrage was found dead, with its legs cut off, in 1980.

But today aviaries have been prepared for two of these birds, donated by the ossifrage breeding programme in Heringsy, Austria. Although the couple has not yet reached maturity, the centre hopes they will produce offspring so that ossifrages will once again be part of Bulgaria's natural heritage.

"We aim to have as many people as possible come here and have access to these animals. We run as many campaigns as we can," says Sashka. In her opinion, public awareness-raising activities are important. Besides donations and financial contributions, members of the public can also join the centre's bird adoption programme – not to introduce dangerous wildlife into their homes, but simply to give financial support for individual creatures.

According to Sashka, there is growing interest in this initiative. There are already a number of adoptive parents, some of them children. Students from the Second Primary School in Stara Zagora have organised Christmas and 1 March bazaars for the fourth year in a row, selling home-made martenitsi.

Although everyone is delighted about adopting the birds, and often ask after their health, it is very important for the birds not to have too much human contact. "The more they get used to people, the more they deviate from their natural development pattern," says Sashka, adding that the best part of the centre's work is the moment when a bird is set free. It is an affirmation of all their efforts.

She says "The bird flies out of your hands in a flash, and after 15 seconds or so it may be lost in the sky and you may never see it again, but these few seconds are incredible…"

You can learn more about the centre at www.greenbalkans-wrbc.org.