THE CHALGA WAY OF LIFE

The elderly woman smiles at the blonde girl standing in the small park with her grandmother. "What's your name?" she asks. "Ivana," the child answers. "Oh, like the singer?" the old woman asks without a trace of irony in her voice. "Yes! I want to be like her when I grow up," the girl replies as proudly as any Italian teenager named Luciano would, when talking about the opera singing lessons he is taking. "She is very good. She sings in the children's choir," her proud grandmother boasts.

Ivana is one of the big names in the star-packed chalga firmament. Her repertoire includes such hits as

I'll drill you with a hundred bullets
If I catch you playing around
'Cause you say you're going hunting
But you are having sex instead.

Rumour has it that she was involved with Dimitar "Eyes" Zhelyazkov, a shady businessman from Nesebar, who confessed to drugs dealing in 2008 and is currently doing time in jail. However, Ivana is truly a star. She features in the gossip columns of newspapers and TV shows, earns a fortune singing in restaurants and at birthday parties, and has tens of thousands of staunch fans.

You may have already noticed this: not everybody in Bulgaria listens to chalga. Indeed, not even all taxi drivers do. But it has become something more than just a kind of music.

Just like the blues in America, it has become a way of life. It could be said that chalga, whose fans would rather call it "pop folk," has even silicone-breasted the tape ahead of the blues.

It has managed to become the standard for a whole nation. Its mark is evident in everything ranging from those Bulgarian women who dress sexily in miniature skirts and high heels, to the tolerance for those who go beyond the bounds of what is considered normal or moral behaviour, whether they are gangsters or corrupt politicians.

A love of heavy gold jewellery, holidays in "VIP" hotels at the concrete-encased Black Sea coast, gaudy clothes with conspicuous Emporio Armani labels (probably made in China), provocative sexuality and transgression of rules: Bulgarians may have been predisposed to all these, but it is chalga that has made such behaviour seem normal.

Ironically, when it appeared in the first years of the democratic changes, chalga was the most democratic type of music. It was made by the people and for the people. In those days, the old pop singers, who had become famous under Communism, hardly ever appeared on stage. Young pop singers preferred vague lyrics, such as "I am only a lilac blossom, I am a lilac."

At the time of the mid-1990s' economic crisis, with the appearance of the first pyramid schemes and the vacuum left by the change from one political system to another, millions of Bulgarians felt the only ones who adequately voiced their terrible problems were the first chalga stars.

For example, Volodya Stoyanov's hit "Pyramids, Pharaohs" expressed the whole drama of those first years of the transition:

But chalga missed its chance of becoming a kind of protest music. Bulgarians have not had the opportunity to witness the appearance of their own vulgar, Eastern, nonconformist star.

In no time, instead, pop folk became connected to organised crime. From antagonists, the thugs quickly turned into protagonists. "Tiger, Tiger," a now iconic song by Popa, or the Priest, and Rado "Fir-Cone," is a good example. This is how it goes:

The women who hung around with such men lived in the manner indicated by Kali's song:

I'm a playful butterfly
And I fly from flower to flower. 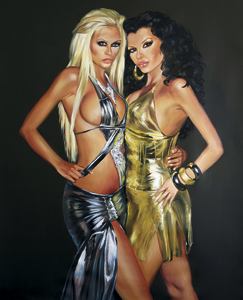 There is nothing strange about this. In those days, only gangsters had money to splash out on concerts, tips and chalga singers' video clips. The link was two-way. Ivo Karamanski, the alleged godfather of organised crime in Bulgaria, recorded a pop folk album in 1997, for example.

However, the connections between gangsters and chalga remained mainly in the area of sex. Rumours linked Gloria, another Bulgarian chalga megastar, with Georgi Iliev, considered to be one of the bosses of the Bulgarian mafia. Singers Katie and Kali were also allegedly his lovers.

Big businessmen also had their fingers in the pie. Konstantin Dinev, owner of the Kosharite tavern, whose stage launched the careers of numerous chalga divas, fathered children with Emilia, Nelina and Anelia.

This mixture of rich people and beautiful singers soon became what is regarded as "high life" in Bulgaria. It quickly gained publicity and by the end of the 1990s, helped by the media, had become a trendsetter.

The appearance of the first specialised newspapers and magazines convinced the public that chalga could not be so bad if it was given media coverage. In turn, the Planeta cable TV channel, owned by the Dimitrovgrad-based Payner Studio, introduced chalga to every Bulgarian home with its 24-hour broadcasts.

Veselina, the first radio station to play only pop folk, soon had rivals on the air. Within a month or two, Radio Romantica, whose policy was to play only love songs, replaced the hits of Whitney Houston and Mariah Carey with the ballads of Azis, Gloria and the rest.

Today, pop folk divas have put down strong roots in the media. Men's magazines are sure to increase their sales if they show them unclothed on their covers. Women's magazines, even those calling themselves "lifestyle," publish extensive articles about the love dramas and rivalries of those in the chalga world.

Pop folk stars are also guests on TV. Azis even hosts his own show on TV2, in competition with Slavi Trifonov, who is credited with popularising the pop folk style in the first place.

Chalga singers are always among the key participants in the VIP versions of Big Brother. Rayna and Konstantin took part in its first season, which Konstantin won, while the second featured Azis and Desi Slava.

The chalga participants in the third season are the Roma star, Sofi Marinova and Milko Kalaydzhiev. The jury of the Bulgarian Music Idol inevitably features a female chalga singer, while one of the invariable tasks for the contenders is to sing a pop folk hit.

The institutionalisation of pop folk has apparently reached its peak. Singer Sasho Roman, for example, was on the Bulgarian Socialist Party ballot for municipal councillor in Sofia at the local elections in 2007 and even sang at the electoral campaign concerts.

Chalga diva Esil Dyuran has drummed up support at similar concerts for the Movement for Rights and Freedoms more than once and in 2007 Ivana sang first for the prospective voters of the Bulgarian Socialist Party and then for those of the Citizens for European Development of Bulgaria.

Azis, who shocks many with his, at best, ambivalent sexuality, and Sofi Marinova "lent" their voices to the Socialists. There have been rumours recently that for the upcoming elections nobody will get to watch folk concerts for free because Brussels frowns on such campaigns.

Preslava, who is all the rage for chalga fans now, took over the stage at the New Year Concert in the centre of Sofia on 1 January 2009.

In other words, chalga is ubiquitous. This explains why those Bulgarians who like neither this type of music nor the way of life it promotes have begun referring to other things as chalga, too.

You may have heard the expression "chalga historian." It describes those authors of nationalistic books and TV programmes that provide disinformation under the guise of "revealing secrets about Bulgaria's past."

There is also "chalga folklore." This refers to music based on authentic folk tunes with a chalga superstructure and to the folk ensembles with their mega-productions in the style of Lord of the Dance, which have recently become popular.

Chalga has evolved somewhat in the past few years. Preslava, Desi Slava, Gloria and the rest have increasingly turned to sentimental ballads with such syrupy lyrics that even Céline Dion would think twice before singing them.

For the time being, nothing can oust chalga from the top of the music industry or from the people's hearts. Pop folk singers are the only artistes in Bulgaria who really make money from what they do. The style is affectionately referred to as "music for the soul."

This confused an English teacher who had come on an exchange programme from Birmingham. "What kind of music do you like?" she asked a student. "Music for the soul," the girl replied, having in mind Ivana. The teacher never did learn that her Bulgarian student was not actually a fan of soul music.

Chalga accompanies Bulgarians even when they are away from their country. They might have lived in the United States or Western Europe for years but continue to listen to pop folk music downloaded from the Internet. On tours abroad, chalga stars play to full houses. Expats say they listen to chalga for nostalgic reasons.

The funniest thing of all is that even after its 20-year domination of the music market and "high life," chalga continues to be regarded as a "sinful pleasure." You will often hear intelligent-looking young people say they "admit to listening to pop folk". Have you ever heard anyone using such a verb to describe their passion for the blues?

So far there has not been a music genre that better expresses the aspirations of the Bulgarians than chalga. This explains why "Shopska Salad" by Rado "Fir-Cone" is still among the most popular all-time hits.

I love Shopska salad
And drinking icy mastika,
The sea waves caressing me
And blonde chicks all around.
I am a sly one, oh bro,
I've got piles of money.
I am waiting for the summer heat
To go to the seaside.

Chalga is a well developed industry and, strange as it may seem at first glance, the lyrics and music may be written by professionals whose tastes are often quite different. For example, Mitko "Paynera" Dimitrov, who is the owner of the largest studio and production company, is a dedicated Deep Purple fan. Despite their apparently intellectual aura, chalga songs deal with only three basic topics: easy sex, easy money and a combination of the two. Masterpieces such as Ivana's "Something Untypical" manage to encapsulate the complete chalga philosophy. In just a few lines, the heroine encourages breaching the law – how many times? Count them yourself.