FROM HIGH BEFORE HOMEROOM

Maya Sloan grew up in Oklahoma City and currently lives in Hollywood, California. She has an MFA in Creative Writing from Boston University, as well as an MFA in Fiction Writing from the University of Arkansas. Her first novel, Red Dirt and Ice, will be published by Simon & Schuster Pocket Books in 2010.

She has had stories published in Passages North and Driftwood, with another forthcoming in Boulevard. Maya received the Inaugural Saul Bellow Literary Prize from Boston University, a St Bolotoph Foundation Emerging Artists Grant and a Walton Foundation Creative Writing Fellowship. She also received a Lily Peter Prize and a Vermont Studio Center Fellowship. She currently teaches at Pepperdine University in Malibu, California. 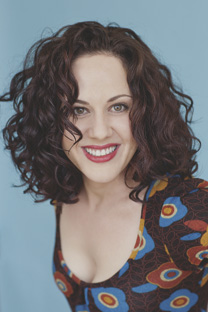 "Nice thing he's doing, serving the country like that. Now Mitchell here ain't got much patriotism, we've had many a-talks about it. It ain't his fault, really, it's a generational thing. But I believe in this great nation, son. Can't take it for granted. We could be in a bread line with a buncha commies somewhere, instead of right here in the greatest country the earth has ever known." Pops grins and gazes fondly across his muddy, shit-stained yard. "The land of milk and honey." He turns to me. "Y'know," he says, "I served in 'Nam."

"Best years of my life. Don't let no one tell ya different. These guys in the VA hospital, havin' flashbacks, I call bullcrap on everyone of them. Milking the system. Good times, Nam.Good friends. And I haven't had poon that sweet since, though you better not tell the missus. Sweet-ass chink poon, 'nuthin like it. Those ladies got class. Born to serve their men, just like in the bible. Know we gave 'em a rib. Appreciate it too. You wouldn't believe some of the stuff they can do with their pretty little mouths. Ha ha ha. You can call me Pops, son." He smiles at me. His teeth seem to go on forever. Long in the teeth, now it makes sense. "So, I guess we best getcha fucked up, huh, boy?"

I've seen plenty of meth labs on the web, but walking inside one is like a Star Trek rerun, that initial moment when the transporter beams Spock and Kirk to some alien universe and they smack head-on into the unknown. The first thing I notice is the smell, worse than anything I could think of, worse than a fresh load of diarrhea in a baby diaper, not that I've ever changed a diaper, but I'll bet it's just like this. It's overpowering, like rotten eggs and my mom's nail polish remover, with something sickeningly sweet underneath, an overripe nectarine that has been in the sun. Mitch doesn't seem to notice. I breathe through my mouth. The place is organized. The plastic tubs of Drano are stacked in a pyramid, the metal containers of acetone in a neat line, the hundreds of empty boxes of Sudafed in sky-high stacks, like an enormous game of Jenga. This guy knows what he's doing. I know it's hard to get that many pills from my research. Since they passed the Combating Meth Act, you can only buy two packs at the Walgreen's, and they keep them behind the counter. For an operation like this, you got to have people working for you, going from store to store collecting boxes. They call it Smurfing. The Smurfs were gatherers. I always thought the Smurfs were kind of gay, even when I was a kid, though I did have the occasional jack-off fantasy while thinking of motorboating Smurfettes big blue titties.

Picnic tables are covered with jars and bottles of liquid. Some have tubes snaking out of them, while others are gurgling. Some are topped in foil, and one bottle has an inflated pink balloon attached to the end. Mitch was right about Willie Wonka. I feel like I've stepped into the chocolate factory, that scene where the gigantic machine whirrs and enormous levers are manned by Oompah-Loompahs, and in the end there it is, that little bitty everlasting gobstopper that will change the face of the universe. I'm here for the gobbstopper.

I never thought I'd be in a lab. I thought I'd score a quarter gram from Mitch on a street corner, do the handshake pass-off you see in movies, thank him for his help and be on my way. But here I am in an actual methamphetamine production establishment. Not the industrial superlabs of Mexico, but definitely bigger than the photos of most of the shack/motel bathroom operations I saw on Google Images. I am standing in the middle of a clandestine lab. A "clan lab" the cops call it. According to some reports, 15 percent of meth labs are discovered due to an explosion. Cops joke that it's easy to find meth, you just follow the fire. Meth explosions are dangerous. I could get third degree burns, lose a limb, go blind. But the most pressing issue is not puking from the smell. That would be really embarrassing.

I stand there awkwardly, not sure what to do, willing my gag reflexes to do their job. The music comes back on, this time Guns and Roses, who I know about from watching the VH1 Behind the Music. It's a nice sound system. Mitch doesn’t seem concerned with any buzzing now. He's in his element. He hops around the tables like an excited little boy. He giggles to himself. He kneels in front of a Peter Pan Peanut Butter jar that is filled with a thick, pee colored sludge. There is a pipe connected to the bottom, and it is gurgling. "Look at this, 'lil Schaffer! How rad is this?" He points to the jar.

I try to walk over coolly, even though my legs are wobbly and waves of nausea ebb and flow in my belly. "Rad," I say.