by Rayko Baychev (BG); translated from the Bulgarian by Angela Rodel; photography by Anthony Georgieff
Rate this item
(0 votes) 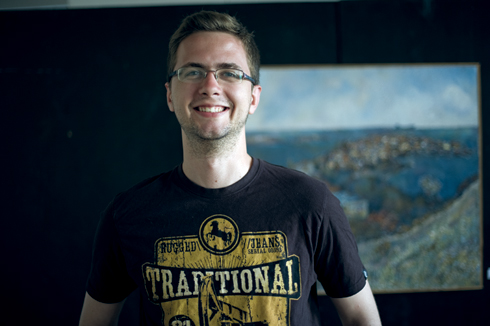 Rayko Baychev was born in Veliko Tarnovo, Bulgaria. He is 24 years old. He holds a BA in Journalism from the University of Sofia and is currently pursuing an MA in Arts and Modernity at the same university.

He has been awarded first prize in several literary contests, the most important of which was the award he won for his play The Gadulka is Burning at Theater Sofia. This one-man show was also nominated for the Ikar Award for best drama.

If they tell you there's no instrument more thankless than the gadulka, you better believe it. There isn't.

Although I doubt anybody would ever tell you that, since modern people could hardly care less about the gadulka and their lives often pass with nary a word about it. In fact, people have a rather hazy idea of the gadulka. They've got similar ideas about words like "plow," "sheaf" and "thresher" – that is, something of rural origin, but they're not quite sure what. For that reason, they're usually satisfied with the explanation that the gadulka is "something like a violin" and leave it at that, figuring they don't need to know more. And of course, they don't need to know more. The only sure thing in life is that you can live it out well and good without ever finding out just what kind of instrument the gadulka is.

I've been playing the gadulka a long time now and I can't say that I'm particularly happy. I've been a gadulka player for 18 years and I can openly declare that happiness and the gadulka are two mutually exclusive things. The gadulka just isn't meant to bring happiness to modern people. The piano – yes. The guitar – yes. The flute – debatable, but yes. The gadulka, however, brings unhappiness both to the one playing it and to those listening to it.

Gadulka shame, for example, is something that every gadulka player secretly suffers from. The problem is that you're constantly running up against people's lack of comprehension. If you've got a guitar, they're usually squealing all around you, jumping up and down ecstatically – hey look, a guitar, come on, play something for us!, while the sight of the gadulka alone sends them into a panic, they look at you defensively and ask what it is. Their eyes say: "please put it back in the case." And you've got to spend a long time explaining that this is a gadulka, a Bulgarian folk instrument – and you sound like you're apologizing for disturbing them. In the end, they finally make you play something, but the second you start playing, some primitive horror flickers in their pupils and you yourself start feeling horrified both by yourself and the gadulka; and the only way to save the situation is to start playing some popular tune, say, "Old MacDonald Had a Farm" or "Ode to Joy." Then their eyes brighten up, they breathe a sigh of relief and they might even start humming along. But when all's said and done, no matter what they do, you're always left with the feeling that you're an outsider and somehow not quite right in the head, since out of all possible instruments you went and started playing this one.

That's how it is because the gadulka is not designed for solo performance. The gadulka is part of the folk orchestra and it just doesn't sound right at all when taken out of it. The fact that I've been a gadulka player for 18 years does not prevent me from admitting that there is nothing more terrible than solo gadulka. The solo gadulka simply cuts into the ear, wedges itself sharply in the head and at times threatens to destroy reason.

And so it turns out that while you're supposedly a musician, you can't play anything nice by yourself. This, in turn, weighs badly on your self-esteem and throughout your whole life you can never shake the feeling that you're a total zero without the others and that you constantly need their help.

In short, the gadulka is constantly getting in the way of your communication with other people. I feel obligated to warn you not to take it up if you've got some common name like Peter or George, for example. This is a bad combination, because people immediately think to differentiate you from all the other Peters and Georges via the gadulka. So, if your name is Peter and you play the gadulka, it's almost certain that sooner or later you'll become Pete the Gadulka. On top of everything, the word "gadulka" itself is so catchy and memorable that it makes the nickname eternal. You can stop playing, you can become a lawyer, banker, artist, whatever – it makes no difference, to the world you will always be Pete the Gadulka. That's even what it'll say in your obituary: With great sorrow we inform you that on January 26, the year two-thousand and something, Peter "The Gadulka" Petrov suddenly passed away.

(He tosses a chunk of resin into the air and catches it.)

To make a gadulka, you need a good piece of wood – cherry, sycamore and walnut all work fine. First, you carve out the body, then whittle down the other parts. This is called the head (points at it). These are the tuning pegs for tightening or loosening the strings. The strings themselves are attached to the body right here – this is called the bridge. The strings are attached to the body with this so-called knucklebone. It takes a lot of tinkering to make a gadulka. Lots of work. You'd think that after all that work, the sound would be enchanting, but instead it's like this:

(He saws out a few notes that grate on the ear unpleasantly.)

The situation was even more tragic a hundred years ago. Back then, instead of wire, the strings were made of dried cat gut. And the bow was made of horsehair. Which means that to get sound out of a gadulka you rubbed horsehair on dried cat gut.

From there, everybody can reach the conclusion that to make a gadulka, what you need is expert know-how, fine wood, a plucked horse and a dead cat. Unless you've got some way of taking out the guts without killing it, but that's highly doubtful. Yes, you can bet that cats hated gadulkas back in the day. Their triangular little heads would go wild as soon as they heard the sound of a gadulka. Poor cats. Getting their guts stretched on a hunk of wood, getting sawed on with a bow, getting stretched and slackened by tuning pegs! And dancing and singing love songs all the while!

Although maybe people waited for the cats to die before twisting up their innards. That's hardly likely, though. Those were tough times. Almost every family had lost kids; who's gonna give a rip about the cats? So, if you ask me, they didn't wait at all, but just killed 'em straight away. What, to make a gadulka, you're gonna wait for the cat to die? OK fine, but what if it doesn't die? Nobody knows when exactly cats die. Some die right on schedule, while other live a hell of a long time. The old lady who lived in the apartment next door had a cat that must be 25 years old by now. And when it was 10, the cat had already gone blind, it was deaf and lame and had had two operations on its stomach. The whole building was waiting for it to die. Finally, the old lady died. They threw the cat out on the street and everyone was thinking, "OK, now it's really gonna kick the bucket." But it didn't kick the bucket. Some young family took it in. The whole apartment building condemned this move, since it was obvious that the cat already had three or four paws in the grave. It would just upset the kids. It could die in their arms just like that. While they're petting it, it could twitch two or three times, give a plaintive mew and lie there lifeless in their little kid arms. But the cat kept right on living. And it went and recovered, on top of everything. After three years with the family, its hearing came back, its fur had gotten shinier, and it even looked like it could see a bit. It downright gave me the creeps to see it so full of life. After another four years it was already going outside the house and chasing pigeons. It's still alive to this day and the last time I saw it, it was yowling like a young pussy-cat.

I don't think it's ever going to die. Everyone in the building thinks that, but nobody says it aloud, because it sounds crazy.

But I wasn't talking about that. That cat isn't a topic for conversation at all. My thoughts just wandered in that direction. The important thing is the gadulka. I was talking about the gadulka and how back in the day its strings were made of cat gut.

But don't go thinking that this is only the case with the gadulka. No sir. Half the folk orchestra plays on animals! Unlike the Scottish bagpipes, for example, which are now made out of cloth, the Bulgarian bagpipe is still made of the hide of a young, skinned goat. And the drum is made from pig skin. So let's line them up one next to the other – drummer, bagpiper and gadulka player. One's pounding on pig skin, the other's blowing a flayed kid-goat, the third is scraping horsehair over dried cat gut. And what do you get from this bloodbath – music!

They don't tell you most of these things when you start studying Bulgarian folklore. They present it pretty idealistically. They only tell you the details when you're already in high school and more stable psychologically. It was then that I realized how much death there is in our folklore. I took it like a man. But ever since I found out about the kid-goat and the bagpipe, I always feel like the bagpipe itself sounds like a goat about to be skinned. And it also seems like there's something feline in the gadulka. And that's why the drum thumps like that, it's the sound of the pig ramming its head against the door of its pen, because it wants to get out and gorge itself right quick. Just take a listen sometime.