by Ivan Landzhev (BG); translated from the Bulgarian by Angela Rodel; photography by Anthony Georgieff
Rate this item
(0 votes) 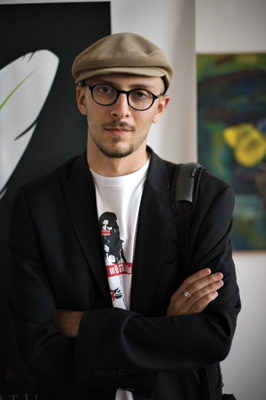 Ivan Landzhev (born 1986) is a Bulgarian poet, scriptwriter and short story writer. He holds a BA in Philosophy and an MA in Arts and Contemporary Culture (20th–21st centuries) from the University of Sofia. He was the winner of several national poetry awards for his debut collection Blame It on Bobby Fischer. His poems have appeared in most of the leading magazines, newspapers and literary journals in Bulgaria, as well as in English, in Granta.

Besides English, his poems have been translated into Spanish, German, Slovene and Croatian. He himself translates from and into English. In 2011 he participated in Days of Poetry and Wine, an international poetry festival held in Slovenia.

Back then I was broke, even broker than usual. Completely broke. This situation landed me straight behind the reception desk of a crappy hotel in the run-down part of downtown – where Sofia's buildings had shown enviable determination and had thumbed their noses at the bombs. Where Churchill said he planned to plant potatoes, I started working (relatively speaking) as an administrator. It was only for a month's rent's time, that reassured me, as did the word "administrator." The hotel wasn't from the time of the air-raids, but everyone thought it was. It was easy to get confused.

I checked the guests in, checked them out and took care of their entertainment. The place was a miserable dump and the entertainment began and ended with whores. All kinds of riffraff showed up – balding perverts with sweaty foreheads, horny foreigners, small-time businessmen with their homely mistresses, who didn't want to give me their IDs so they wouldn't be found out. And of course, the whores. They all reminded me of that statue of Sofia nearby. With her gilded face and her arms flung needlessly open, wanting something. One and the same statue. Every night. Sofia would arrive, drenched, with her make-up smeared, wretched but beautiful.

The night before I quit, she came again. The Dutchman in 205 asked for her. He came back to the hotel and stopped to get his key. He was a dark-skinned, middle-aged guy with an absolutely moronic face that clearly broadcast an appetite for fresh, cheap and local flesh. He was sweating. He sat out in front – in what the manager, with unabashed pride, called the "lobby bar." I opened up a Heineken for him and he asked me in broken English: "Can I take girlfriend tonight?" I told him it was no problem. There's no place in the world where it's a problem to call a "girlfriend" for you. I was just about to ask him if I should dial up the relevant places when he informed me that actually "a man vill bring her" any minute. "Girlfriend" showed up shortly, with said "Man." The Dutchman paid him, "Man" took the money and left. She stayed with the two of us.

At the very first instant of direct visual contact, all of these girls really do look the same – I'm talking about a few tenths of a second. In this first of first glances you don't even bother to take a good look – besides, you're not the one who's paid, so there's no point. Shortly after that you stare. That's what I did, too. She was pretty. She couldn't have been even twenty years old. The Dutchman bought her some cheap drinks, gallantly chatted her up in broken English, she didn't understand a thing. Her only response was a "hee hee" – the sole, eternal and irrefutable argument she possessed. Something like my argument that I had to pay the rent. She understood very well, though, when he invited her upstairs. They went upstairs. They had just about outrun my peripheral vision when she turned towards me, perhaps involuntarily – and again gave that slightly flustered "hee hee." I felt like in this case it meant something along the lines of "well… what else can I do?"

The second appearance came about two and a half hours later. She arrived with the noise of the elevator and the sense that my shift was finally about to liven up.

And here it is, the administrator has been drinking and she comes downstairs. Her movements resemble a misaligned machine, she's not a statue anymore. There's rust in her gaze. She's not drunk or high or anything like that, she's simply still pulling herself together. The circles under her eyes are darker than before, her gestures are sluggish and noncommittal, she's smoking a cigarette. They're always smoking a cigarette when they come back down.

She comes over to me and says: "Can you call me a cab?"

I dial. There are no cars available at the moment, but I should call back in a few minutes. I pour her some of the whiskey I'm drinking. She tells me that she lies to her parents about working the night shift at the Sheraton and getting big tips. She has a boyfriend who "supports her," whatever that means. She's satisfied, because she makes X amount of money every month and has fake brand-name clothes, a phone with the latest gizmos, along with all the other modern indicators of freedom. In principle, it's a job just like any other job – you show up and they pay you. In principle this, in principle that. She turns out to be the most principled person I've talked to over the past year.

Maybe she's right. Or else I just don't feel like arguing. As I watch her taking practiced sips for her glass, a song pops into my head. Nothing pops into her head. The conversation has no way of continuing, since neither of us feels like talking – she subconsciously keeps up her practiced stance, while I, for my part, think about just how much moralising literature comes up short at that moment. She wants a cab to Tolstoy. And on top of everything her name is Katya, or so she confides to me. So yes, it's clear, she's Katyusha Maslova from Lev Nikolaevich's Resurrection. I imagine it all more beautifully, I want it to be like in the novel, I want to be Prince Nekhlyudov the Administrator, for her to be the righteous whore Maslova, and for me to set out after her to Siberia, repentant. I also don't have any problem being Nicolas Cage from Leaving Las Vegas, and for her to be Elizabeth Shue and for me to wallow intoxicated in her prostitute's flesh, and for her to understand me like no one else in the world. That kind of bullshit.

But we just sat there, sipping from our glasses and taking part in a conversation that doesn't happen. Something had to be done. I got up and took her hand. She wasn't surprised, on the contrary even, she just set down her glass. The bathroom was only a few steps away. We went inside. Katya grabbed the curved faucet of the sink with both hands. Before that she didn't take off her shoes, just pulled up her skirt. Nice view.

It really was nice, at one point I was on the verge of kissing her without meaning to. While Katya, without meaning to, had turned on the water and a cold stream suddenly shot out. After I was done, she let go of the faucet and turned off the cold water. She had grabbed it so tightly that there were traces of thin fingers on the metal which fused together at the end and formed some kind of strange irregular figure. Katya fixed her skirt. I called for a cab again and now they had cars available. She left.

I've got this pet paranoia, I always check for tears in used condoms. I hold it up to the light bulb in the bathroom to check whether it had ripped without me noticing. It's really stupid, I know, but I always do it. Something has to be done.

It hadn't ripped without me noticing it. It hadn't ripped at all. Everything was fine. I finished off the whiskey, thinking it all over somberly, the men and the women. The next day I took my money, got out of there and that was it. A month's rent's time was up.