Ivan Dimitrov is 27 years old and a graduate of Bulgarian Philology. He is the author of Local Foreigners, a book of short stories, and the novel Life as a Missing Spoon. 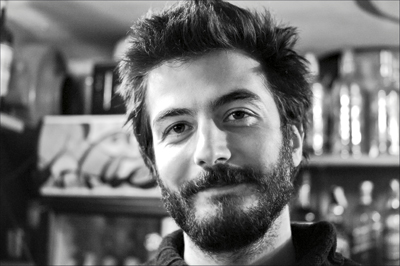 A baby's howl rang out from the neighbouring room.

"Sorry, the baby just woke up, we'll have to take a break from the interview for a second. I'll put him to sleep again and come right back."

She left the room, leaving him alone. Now, when she wasn't in front of him, the invisible line disappeared and he approached the desk. He ran his hand over it – oak, a vintage piece of work. He knew that without even thinking – he'd been fired from the wood-working shop only five months before. His friends had urged him to go into business making special-order furniture, but he didn't want to bother. He was sick of wood, he felt like working with some other material, he just didn't know what yet. He often wondered if he shouldn't go to college, but had no idea what to study. He was 29 already, and he'd graduate in four, five or six years. It seemed too late to him.

He walked around the desk and peeked at the monitor. An open Facebook page. Who wasn't on Facebook these days?

In the other room she was hushing the baby, murmuring to it, singing a song. It quickly stopped crying. Hearing rustling, he went back to his seat.

"Sorry about that, but babies just can't wait," she said.

"What about a wife?"

"I thought the two usually go together… In other words, no."

"You really should have a kid! I'm serious. You can't imagine what an amazing effect children have on men!"

"First I’ve got to find myself a wife."

"That is a lot harder," she admitted.

Since coming back, she had been standing at the other end of the room, in front of the door. The invisible line again took up its place between them.

"Let's get down to business, shall we?"

"So if I've understood correctly, you're looking for someone to fire?"

"Exactly. I can't fire one of my employees. They do good work, plus it would be bad for team morale. So that's why I've decided to hire somebody to fire."

"Would you mind me asking why?" he smiled.

She went back to the desk and again put her hand over the mouse.

"I've been wanting to fire someone ever since we opened the hotel. In the beginning we were barely breaking even, we were always on the verge of going under. Then I got married and had a baby. I needed the money. Now things have finally stabilised, but we've got a good team. It would be crazy to spoil everything with a sudden firing."

At first he couldn't believe it when he'd spotted the ad looking for someone to fire in the "Help Wanted" section. As soon as he saw it he thought of his last job, those two years in the workshop. He remembered how rumours had suddenly starting flying about layoffs due to the crisis. How they had managed to ruin the shop atmosphere, since nobody knew if he'd have a job the next day.

One day he got called in to the director's office. He could guess why and walked slowly, as if trying to put off the firing. When faced with the reality of it, he thought he would faint; yet the moment he heard the actual words, something happened. A lightness seized him, he felt almost happy. He sprinted away from the workshop. There was no longer anything tying him there. It was as if he had overcome gravity itself.

"Are you sure? It’s not easy to find people willing to be fired."

"You can find people for anything on the Internet. I want to be fired."

She was getting excited. Her fingers dropped the mouse and danced gleefully across the desk.

"Don’t you want to discuss the formalities first?"

He would work for a few weeks. He would have to try to be one of the best workers. In exchange, she would pay him for his work and once she figured the time was right – but no later than his second month – she would start yelling at him for no reason, insulting him, calling him a deadbeat, a loser, but he wasn't supposed to talk back. After firing him, he would get three months of severance pay.

"How does that sound?" She asked.

The Elizabeth Kostova Foundation and Vagabond, Bulgaria's English Monthly, cooperate in order to enrich the English language with translations of contemporary Bulgarian writers. Every year we give you the chance to read the work of a dozen young and sometimes not-so-young Bulgarian writers that the EKF considers original, refreshing and valuable. Some of them have been translated in English for the first time. The EKF has decided to make the selection of authors' work and to ensure they get first-class English translation, and we at are only too happy to get them published in a quality magazine. Enjoy our fiction pages.