While playing football with his fellow writers on one of his frequent trips around Europe to poetry festivals, workshops and meetings, writer Georgi Gospodinov broke his leg. The cast didn't slow him down, however. Gospodinov limped through Vienna, Graz and Klagenfurt on crutches and won a writing stipend in Berlin, previously held by Mario Vargas Llosa, Mircea Cartarescu and Susan Sontag. 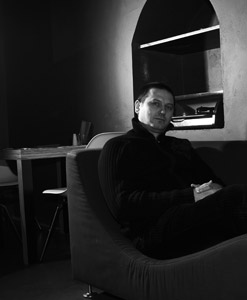 His most popular book, Natural Novel, is in its fifth Bulgarian printing and has been translated into French, English, Czech, Danish, Italian and German. Gospodinov is the author of three collections of poetry, a book of short stories And Other Stories, the play D.J., a research study called “Poetry and Media”, the anthology Ballads and Break Ups, a book of Christmas stories entitled O, Henry, and the bestsellers I Lived Socialism: 171 Personal Stories and the Inventory Book of Socialism (with Yana Genova).

When not breaking bones in Europe, Gospodinov is an editor at Literaturen vestnik, or Literary Newspaper, writes a weekly column for the daily Dnevnik, takes care of his one-year-old daughter Raya and fantasises about smoking.


Does Bulgarian literature stand a chance of becoming famous outside Bulgaria?

The very idea that there is an “out there”, that the world is accessible, huge and varied is already comforting. When Natural Novel and And Other Stories came out in foreign languages, I felt like part of me already lived in Berlin, London, Chicago, Vienna, Paris and Rome. Afterwards, when I went to premieres and readings in those cities, I felt relaxed, as if I had already been there.


When you travel you take a lot of photos, but rarely of the things tourists normally shoot.

There are many moments in life that I want to capture immediately – sudden situations, details, little things that quickly disappear. Writing is too slow to catch them. So I take pictures of those things instead of castles or monuments, because you can get them on postcards.

But photography isn't my only “salvation”. I'm also interested in beekeeping, even though I don't keep any beehives myself. I know what should be done during each season and I buy specialist newspapers like Pchela i kosher, or Bee and Hive – I'm taking care of some imaginary bees.


Until recently you were rarely seen without a cigarette.

Up until a year or two ago I was a passionate smoker. I had all kinds of cigarettes at home – for example, the lowest caste Indian cigarettes, made out of a tobacco leaf rolled up and tied with red thread in a paper package, and my favourite Indonesian clove cigarettes with a sweet filter. They burn quickly and the cloves crackle.

I've smoked cigars, pipes and hookahs, and I've rolled my own cigarettes. I made my first pipe, Tom Sawyer style: a classmate of mine and I hollowed out a corn cob. We stole a couple of handfuls of tobacco from the tobacco factory in Yambol, where we had gone ostensibly to write a report for the local newspaper. In any case, the report never came out.


What do you cook at home?

Stewed meat with lots of spices. I like to use herbs, especially basil. I also love fish. Fish markets in northern countries are an amazing sight: everything is pink with salmon, like Red Square. In Finland, before I broke my leg I ate salmon. They say that it helps your bones, but it isn't true. I had gorged myself on the stuff and still broke my leg anyway.

What happens when you get “restless”?

It's always possible to just turn your back and leave, go somewhere else, at least for a little while. I would head south towards the Mediterranean or to my favourite Portugal, which reminds me of Bulgaria in its melancholy. I'll definitely write something about that, about the different ways to be sad. Bulgarian melancholy is quite visceral, sticky and deep. I think Mediterranean cultures have more insight into melancholy, they shed more light.


The Elizabeth Kostova Foundation and Vagabond, Bulgaria's English Monthly cooperate in order to enrich the English language with translations of contemporary Bulgarian writers. Through 2008 we will give you the chance to read the work of a dozen young and sometimes not-so-young Bulgarian writers that the EKF considers original, refreshing and valuable. Some of them will be translated in English for the first time. The EKF has decided to make the selection of authors' work and to ensure they get first-class English translation, and we at Vagabond are only too happy to get them published in a quality magazine. Enjoy our fiction pages!

They had met only a few hours before. He was in his very early thirties; she was in her very late twenties. He had to give her a package to deliver to a friend of his across the ocean. She was only a mediator. It was a ﬁve-minute job, but two of the three hours left to her ﬂ ight had passed, and they still couldn't ﬁnd any good reason to part. Now, 60 minutes to ﬂight time, they were standing in the corner of the café in the departure lounge, having their third coffee without saying a word. They had exhausted all the subjects that could keep a conversation going between two people who didn't know each other. And the silence was becoming unseemly. The small table in front of them was piled with empty plastic cups that had acquired most unexpected shapes after long hours of fumbling with them. The coffee stirrers had long been broken into the smallest possible pieces, the empty sugar bags turned into cornets and tiny little boats.

It occurred to him that he could turn this table into a ready-made object, an installation, so to speak, that he could name “An Apologia of Embarrassment” (plastic coffee cups, stirrers, empty sugar bags, a white table). Then he found it stupid, so he decided to keep silent. “What one leaves unsaid turns into broken stirrers and smashed cups,” she said all of a sudden. He thought that he would never meet another woman like this one, who would be capable of reading his thoughts, with whom he would want to spend the rest of his life in this café. He was startled to have used a phrase like “the rest of his life,” even though silently.

“Let's talk,” she said, as if they hadn't talked non-stop for two hours. The remaining hour was too little time to be wasted in beating around the bush and making boats. But since he wouldn't start talking, she said simply: “We have to accept it that sometimes people just walk past each other.”
“The whole irony of it is that they realise it the moment they meet,” he said. “Maybe we have met before. We have lived in the same city for so long. It's not possible that we haven't passed each other at some trafﬁc lights.”
“I would've noticed you,” he said.
“Do you love her?” she asked.
“Do you love him?” he asked.
hey quickly admitted that it made no difference and that it wasn't anybody's fault.

Later he couldn't even remember who was the one who had come up with the life-saving (or so he thought then) idea to invent shared memories, to make up a whole life together before and after their meeting. A pathethic attempt to take revenge on merciless chance that had brought them together, only to separate them. They had 50 minutes at their disposal.

“Do you remember,” he started, “the school days, when we were living on the same street? Every week I would secretly drop a tinfoil ring made of Lacta Caramel's wrapping paper into you mailbox.”
“Oh,” she said, “so you were the one with the rings. My father was always the ﬁrst to ﬁnd them and suspected that some crazy admirer from the neighbourhood was sending wedding rings to my mother. It now turns out that those were for me.”
“Yes, they were for you,” he said.
“Do you remember,” she started, “the last year at the university, when we went off, just the two of us, to that monastery? It was the ﬁrst time we were travelling alone. There weren't any rooms available at the hotel, so they put us up in one of the monks' cells for the night. It was very cold, and the bed was so stiff. I was a little scared. I crossed myself secretly after each time we did it. Five times I crossed myself during the night.”
“Six,” he said. “I was scared, too. Do you remember what happened later, how you came to live with me? Your mother said that she would disown you through The Ofﬁcial Gazette, because she didn't want illegitimate grandchildren.”
“I remember,” she said. “Anyway, I couldn't have children.”

At that point she fell silent. He took her hand for the ﬁrst time since they had met. Very gently, comfortingly.
“It's OK,” he said. “And I broke my leg once, remember? I was already 48, working like crazy, and that month I spent at home seemed to me like real paradise. You took a leave too, you even said that you'd break your arm if they didn't let you do it. And we never poked our noses out of the apartment.”
“And the next year, when they found that I had that tumor… You had read somewhere that laughter could be used as a healing therapy against cancer, and the next two weeks you were telling me jokes non-stop, so that I would laugh. I still don't know how you collected them all. You were so frightened and nice. I think that was when your hair turned white. And every day you would bring me peonies and forget-me-nots.”
“Thank God you're better now. What would I do without you?”

At that moment a voice invited all the passengers ﬂying to New York to advance to the departure terminal. The silence lasted no more than a minute. Then she straightened up and said that she had to go. He took her suitcase and they both left the café. Before going through the passport check-in, she turned and gave him a very long kiss. As if for the last time, he thought, although there had never been a time before.

Half an hour later he turned and walked out. He felt terribly old; he had trouble moving his legs. He deliberately closed his eyes as he walked through the mirrored-glass door, so as not to see his hair suddenly turned white and those stooped shoulders of an old man. With every further step he realised more and more clearly that he could never go back home to his unachievably young wife. And he could never tell her what he had been doing those last ﬁfty years, while he was away.