By Evgeniy Cherepov (BG); translated from the Bulgarian by Christopher Buxton
Rate this item
(0 votes)

Evgeniy has been nominated in the fiction section of the LiterNet 2006 competition for debut authors. He produces and edits his own show at Beroe Online Radio. He is currently writing his first novel. 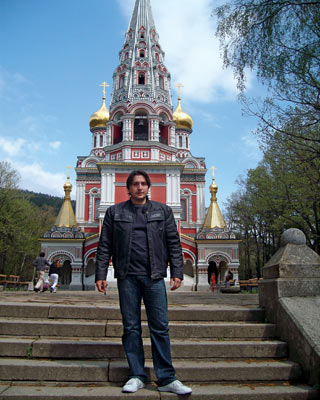 We're kids. We catch ten red ants in a match box. They are "the baddies." We throw them like storm troops on to the nest of quite smaller black ants who are "the goodies." We watch the vicious battle close up. With a matchstick I push back any red deserter into the acid of the battle field. I love the role of God. My matchstick is everywhere.

When the blacks get control of the base, we launch another assault of red commandos. They are enormous, they fight bravely, but the blacks are in hundreds. They triumph. My matchbox, my vanguard space ship flies off for new volunteers. Down below the workers' army patches itself up, braces its ranks and the acid evaporates. I wonder if they can withstand an attack from a heavily armoured transporter. I look around for a big beetle.

I can do this all day. But Mum dusts me down and sends me to the patio. The slabs are hexagonal, cement, hot. Their edges fit my purpose exactly. Close by is the empire of fire bugs. Olympic games are set up. I catch one of the bugs and break off two of its legs. I let it go on the slab in front of me. At the start, it flutters but soon gets used to its reduced legs. It's obviously caught on to the rules because it sprints full speed. If it gets over the edge of the slab, it wins freedom. I have the right to just five strikes with a stick, so I aim carefully. Out of twenty firebugs, only three survive. They are the medal winners. The cement slab is now stained with red. I move on.

What did I sit on? Ow, my bottom! It's red and swollen. Wasps are flying about. Mu-u-mmy-y-y!

Here's Mum. My tears are lost in her hair.