Jeremiah Chamberlin lives in Ann Arbor, where he teaches at the University of Micihgan. His writing has appeared or is forthcoming in The New York Times Book Review, Poets&Writers, The Michigan Quarterly Review, and Fiction Writers Review, as well as in online exclusives for Granta and Тhe Virginia Quarterly Review.

His short fiction is the recipient of a Pushcart Prize Special Mention, and has twise been nominated for Best New American Voices. He is also associate editor for Fiction Writers Review. 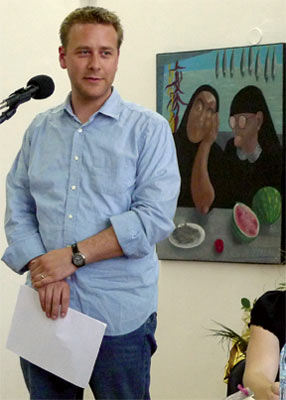 We are out on the ice at the edge of the shantytown that resurrects itself here each winter. Vic is padlocking the door to his shanty. Like everyone else, he's painted his name and town on the side as is required by law. But unlike everyone else, he's added his street address, state, and zip code. And below that, in letters a foot high, he's spray-painted EARTH! in bright red.

"Let's not forget exactly where we are," he tells me and is prepared to tell anyone who might ask. But as far as I know, no one has. The men out here have known Vic and me since we were kids. We grew up fishing on their fringes with our miniature tip-up rods and the dented buckets we carried out to sit on. Some of them even have grandsons who play basketball with Vic's twelve-year-old boy.

"Do you still want to get a beer at The Grocery?" I ask him.

The Green Lake Grocery is the name of the only bar within fifteen miles. In the old days this wouldn't have been a question – we always got beers after fishing. But this season it's taken Vic's wife to get us out on the ice.

"Just go and fish for once," she told Vic. "Your dad could probably stand a night to himself."

So we sat in Vic's shanty – the size of an overgrown outhouse – with the hiss from the kerosene lamp burning above our heads. We felt good even though nothing was biting. We passed a chrome pocket flask and stamped our feet to stay warm. Vic had given me the flask as a wedding present fifteen years ago; its luck seemed to be no better with fish than with women.

Vic agrees to go but wants to swing by his house first for some money. It's twice as far to go this way and I have more than enough money for us both, but out of politeness I don't offer. Vic's place is around the bend from the rental cottage we moved his father into this fall. The real reason we're going this direction is to check whether his father's porch light is on. If the old man remembers the porch light – which is always the last thing he does before going to sleep – Vic can rest assured he's safe in bed.

Vic's father grew forgetful almost overnight it seemed, within months of Vic's mother's death. One afternoon last spring, after teaching, we came by and found him disking the very field we'd help him plant the weekend before.

"Pop, what´re you doing?" Vic asked, jumping up on the tractor to stop it.

"What in the hell does it look like I'm doing?"

"It looks like you're disking the field we just planted," Vic answered.

"Good damn question, Dad. Why would you?"

Vic's father turned and stared out over the landscape of the field – neat furrows where the seed had been planted on one side, fresh broken earth on the other. His eyes flickered behind his glasses.

On the drive home after, Vic sighed and shook his head. "The old man's getting forgetful already," he said to me.

"Maybe he should see a doctor," I suggested. My own father died of pneumonia that had quietly progressed to meningitis. A simple dose of penicillin would have saved his life. I was still living in Texas when my mother called to tell me he was in a coma and by the time I'd made the thirty-six hour drive home he was dead. I still wish I'd flown.

Vic laughed at my suggestion. "An ophthalmologist maybe, but not a doctor. He's just getting old. I mean he's damn near seventy."

That night, after Vic dropped me off, I drew the shades and scratched the needle across the same Bob Dylan album until I'd finished a bottle of Wild Turkey. Vic's father may have been nearly seventy but that didn't seem too far away. I was almost forty now and divorced. Being divorced had to count for something extra, I thought. Like dog years. Or wind chill.