THE ART OF ART MANAGING

Art, culture and proper management of creative industries have proven a force for efficient and positive change for local communities. Just think of the excitement when your visit to another town or country coincides with an interesting festival, concert or art show. Remember all the beautiful pictures you have taken and shared of inspiring exhibitions, thought-provoking graffiti art or innovative visual solutions of urban and rural spaces. Look at the coffee mug rack and the shelves at your home, with their beautiful souvenirs that are more than mementos, but true objects of art. Who can argue, then, that creative industries make our lives more beautiful and meaningful?

Creative industries, however, are more than that. Like other industries they provide employment, but what makes them different is that they bring local communities together, instead of putting on them the burden of the rat race and environmental threat.

Bulgaria proudly claims to be one of the cradles of European culture and literacy, but it is yet to realise the full potential of culture industries and culture management. Both people and institutions don't get it. This is why this May, in Sofia and Plovdiv, the Bottom-Up Culture event put the focus on culture-led urban regeneration, the role of cultural entrepreneurs, creative places and the shift towards socially, civically and politically engaged practices. Bottom-Up Culture materialised with the help of the America for Bulgaria Foundation. It is a followup to the 2016 Salzburg Global Seminar for Young Cultural Innovators, and a part of the FORUM 2019 educational platform, which includes seminars and other events focusing on Plovdiv's being European Capital of Culture 2019.

Bottom-Up Culture's main events were a public talk in Sofia with Shelagh Wright and Peter Jenkison and a professional workshop in Plovdiv where the two London-based culture management specialists were joined by the British Council's Lubov Kostova.

Wright and Jenkison have significant experience in culture management. She has worked for decades on a number of projects on cultural and creative economics policy, publishing several books and countless articles in the process. Wright was also a contributor of the Creative Britain strategy and a member of the EU Expert Working Group of the Creative Industries. Jenkison is a cultural broker with more than 20 years in the culture sector, which he spent advocating and acting for change across the cultural and political landscape and for building of social justice. An abridged list of his achievements also includes being a Pop-Up Chancellor of the Cannon Hill Art School 2015 and a founding director of the £110 million Creative Partnerships creativity in learning programme in England.

In Bulgaria, however, the importance of intelligent culture management seems, at best, largely ignored by national and local institutions. In most of the cases, fantasy reconstructions of ancient and medieval ruins are the only – but very expensive – effort of local municipalities to promote historical heritage to the broader public. On a regular basis businessmen are allowed to destroy beautiful old residential and industrial buildings that used to be – and could have been again – an integral part of life in communities. The sale of ugly souvenirs is seen as enough to boost interest in tourism, and festival programmes mainly gravitate around reenactments of ancient or 19th century traditions, be them folklore dances, production of plum Rakiya, rose-picking or mummers shows. 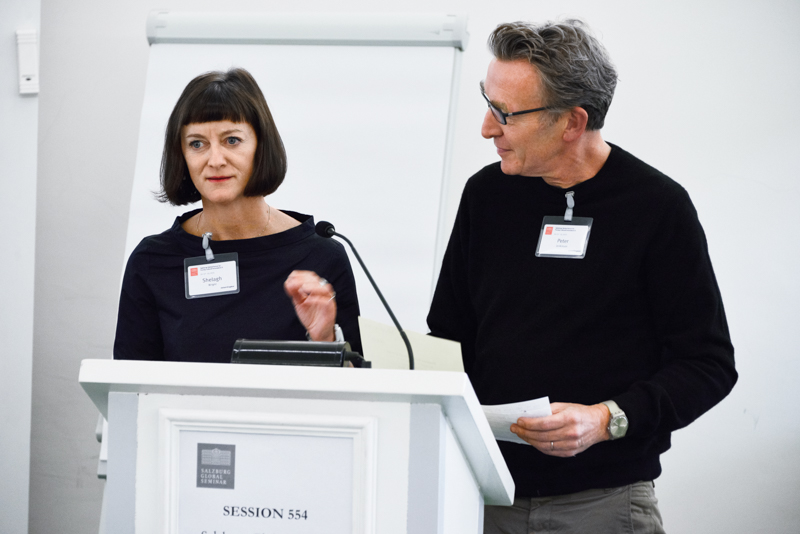 The importance of creative industries should not be underestimated in Bulgaria, believes Shelagh Wright. "They have the advantage of largely being a low capital intensive sector," she said to Vagabond during her stay at Bulgaria. "You don't need a huge factory, heavy machinery or massive infrastructure to start a creative profession or business. Often these enterprises start in people's bedrooms or garages or through small economies of exchange and niche communities and grow from there. Bulgaria has an abundance of smart and committed creative people. From our short visit, Peter and I felt like there are two main things that are needed for the sector's development, and they are both probably more about mindsets than management."

Changing the attitude involves institutions, investors, and people in creative industries. "Municipalities and developers have to move to the 21st century and to understand far better how to nurture and grow the exiting creative potential," Wright explains. "Partly that means supporting people with space to make and offer their work to the market. And not just on short leases – growing creative quarters requires taking some risks and having a bit of patience. There is a growing evidence that slow, careful development of lots of small creative offers is far more effective in regenerating communities and has a bigger pay-off in the long-term."

The second step is for people in the sector to move from competition to collaboration. "Those we met on our short trip in Bulgaria have so many assets they can share, like skills, knowledge, equipment, programming. But a lot of those assets are locked and under-utilised," says Wright. "The sector could be a lot smarter in creating new supply chains, not just for commercial work, and partnerships that can generate much more value. So more crowd-sourcing and more crowdfunding could be very beneficial – the World Bank estimates that the crowdfunding market will be worth $93 billion by 2025. Surely Bulgaria would benefit from a bit of that to build it's creative sphere."

The times, however, seem darker and unsuitable for investing and developing of "fancies" like culture industries. Xenophobia and anti-globalism are on the rise worldwide, creating a toxic atmosphere.

Peter Jenkison is aware of the bad timing, but he is also an optimist. "These are  indeed very dark times across the world. Many are comparing this frightening period with the 1930s only perhaps even more sinister, given the technology forces at play and the potential for sudden nuclear warfare. It is natural to feel powerless and despondent. And yet... And yet there is much we can do by creating new and unexpected alliances, collaborations and partnerships within our communities, nations and internationally, focussing on more positive and practical values, ideas, propositions and scenarios that challenge the threats and lies and fake news of the ascendant Right. And art and culture, wherever you are in the world, provides one of the best platforms or laboratories for imagining and disseminating these more hopeful ideas and behaviours and for offering the means of popular creative resistance."

It is largely a generational thing, Peter Jenkison thinks, and sooner or later there will be change for the better. "This rise of xenophobia and anti-globalism is, largely, driven by older people, including the so-called baby boomers. Younger people, the so-called Generations Y and Z, are said to be less interested in conventional politics than older people and many have lost faith in our political leaders and the political system in general. But this does not mean they are not interested in politics. They are more connected across the world than former generations and are passionate about increasing international understanding and relationships, as well as in getting directly engaged in political change at home in new and usually collective ways. So the resistance and re-imagination we now desperately need will surely come as much from involving (normally ignored or sidelined) younger generations in creatively suggesting and working for different futures as from the older generation of powermongers who, to many, are part of the problem not the solution. Step forward art and culture in this vital endeavour!"

Read 1841 times
Published in Bulgaria Art
More in this category: « THE BULGARIANS* NICOLE SIMMONS, ON TRAVELLING IN BULGARIA, NOT VISITING THE SAME PLACE TWICE AND COLLECTING ART »