by Diana Ivanova; photography by Sava Hlavacek, Desiree Good
Rate this item
(0 votes)
Sava Hlavacek and Desiree Good bring on twenty-seven stories about men, women and what goes between them

It all began with an email I received in the summer of 2005. I was impressed by something Sava Hlavacek wrote when asking for assistance in taking photos in Bulgaria. “Bulgaria is one of the least known countries in Europe. No events from Bulgarian history have become part of European consciousness.”

At that time, I was reviewing our own history and the way we portray it – and its gaps – abroad. I was, in fact, pondering the issue of what we, myself included, are doing when major events from our history have not managed to become part of our common consciousness.

Today, I think the only way to approach this is on a more personal level looking into the contacts that we establish and keep and the relationships we are part of.

This is why Sava and Desiree's project appealed to me. They wanted to fill in the gaps in their knowledge about Bulgaria by documenting exactly what it is that makes our lives a story, a novel or a legend. To examine the bonds that marriage partners establish and what happens between them; how the couple looks at the world, hopes, breathes, thinks and feels. Their project proposed an exploration of the idea that “the roots of human behaviour in society lie in personal and intimate contacts; every decision and act is the result of our personal relationships”.

Sava and Desiree, who call themselves the Daughters, describe their work as being a “socio-cultural” project that looks into intimate relationships and the way they are influenced by social, political and historical events. This was their first introduction to Bulgaria and for Desiree it was also her first contact with Eastern Europe. For Sava, who is of Czech and Serbian descent, the Bulgarian experience was also a step in the investigation of her own story.

The result of their “socio-cultural” exploration is a series of 27 portraits of Bulgarian couples, taken between 15 September and 21 October in 2005. The couples come from a variety of backgrounds and are people who Sava and Desiree either met in the street or through friends or who just volunteered to take part in the project. They were all photographed in their homes and the photos are accompanied by short interviews and recordings of the noises, sounds and melodies that the couples “carry” around with them.

A year and a half after setting out on the venture, Sava and Desiree's most vivid memories are of “the diversity, the strength and energy of everybody we met despite the strange period that the country is going through”. They were most impressed with the “outgoing and spontaneous attitude, both of the people photographed and our assistants, who helped us for free and from the heart”. And they discovered that “Bulgarians enjoy making gifts, and we deeply treasure the presents everyone gave us”.

Working on the project has also taught the Daughters to be more open-minded and trusting: “when you are genuine, many doors will open for you”. Being receptive to new ideas and letting things unfold even if they are not planned has now become a key part of their attitude in their work.

Postscript: I hadn't seen the photographs, so I didn't know how well they had come out. When they sent them to me, I looked at them, read the texts and thought for a long time. I realised they were stories, true stories. One of them, about a couple meeting on the bus, affected me in a most unusual way. I still don't know why, but after that kind of effect one feels grateful.

Couples will be exhibited from 23 May until 14 June at the Goethe Institute in Sofia and on 25 May at a special presentation at the Goatmilk Festival in Bela Rechka. 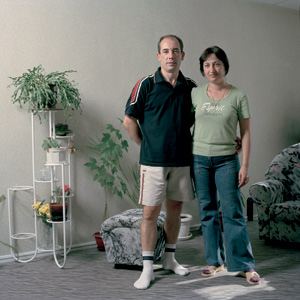 Nezhdet We met in Kardzhali in 1995, a friend, my wife's neighbour, arranged a date for us. So it was a blind date, but there was an instant chemistry. We spent a few months together first and then we decided to get married.
Aygyul We are amazed that ten years later we feel the same love for each other.
Nezhdet It is hard to dream in Bulgaria. For me, a dream should be accomplishable, but in Bulgaria a lot of things are impossible. So, we focus on the small things, the things people need for their everyday lives, but can't afford easily. For example, a car or a nice house. Not only between these four walls, but when you go out in the street, you should enjoy what you see and hear. Once the potholes in the roads disappear, the idyll won't be very far away.
Aygyul We can't even visit the neighbouring countries and, talking about dreams, I dream of travelling with my family.
Nezhdet To Egypt. This is our big dream. 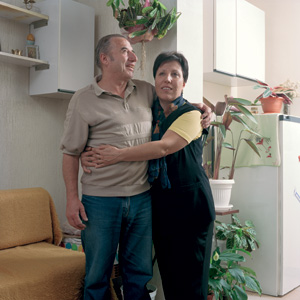 Penka After his brother's death, he had promised himself he wouldn't marry in the following five years. So, compared to other single men, he was a bit older.
Mircho One of my cousins in Suhata Reka introduced me to her. When I first saw her, I said to myself, “She talks too much, but she can't be as much of a chatterbox as me.”
Penka You must believe in yourself first and then you may become religious and believe in God. A great force does exist somewhere, but it is also inside myself.
Mircho We believe in yogas too, we've been doing exercises recently.
Penka But we don't believe in them. And it's not “yogas”…
Mircho What is it then? Come on, tell me!
Penka It's Yoga, it's a philosophy… 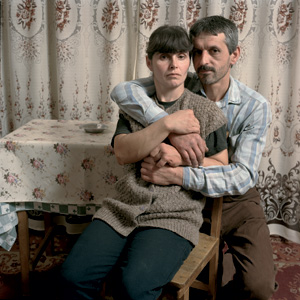 Sanina We met, so to say, on the road. Our first meetings are unforgettable and are related to the bus, the one on which we met every morning, he on his way to work and me on my way to the university. I come from Arda and he is from Smilyan. I always had to stay on the bus longer than he did, though we both got off in Smolyan.
We don't have any big dreams. We have three children and they are our hope. We have to make sure they are well, get a good education and grow up safely. What happens to us, the parents, doesn't matter. We live and fight for our children.
Sami It's getting increasingly difficult for us. We live in the country and we'll stay here. 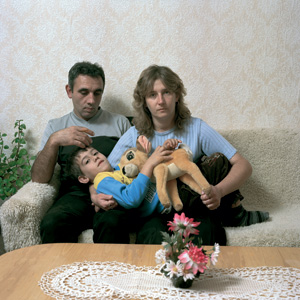 Borislav I work most of the time. There are always things to do, on Sundays too. I relax mainly on Saturday afternoons, but I always work when there's a job to be done.
Petya I believe in God and I hope that our future will be good. I'm fighting for the future of my child. I go to church every Friday and I light candles for the good health of the whole family. If I can't go, I light candles at home. I have always believed that there is some supernatural power.
Borislav I don't believe there is. …Who knows if anything will change! The country must change first. The young men all went away. Things aren't likely to change.
Petya We have jobs, it's important. We divide our salaries each month, bills come first, then food and other expenses. Hardly anything is left for extra things. The worst time is when somebody gets ill. But we shouldn't forget that we are doing relatively well compared to other families, though we don't have a mobile phone or a computer.