After her native India and a spell in Russia, artist Gayatri Manchanda is looking for inspiration in Bulgaria

You rarely see wall cupboards like the one in Gayatri Manchanda's studio. From its depths the petite woman produces, one after another, canvases that portray the domes of St Vasiliy the Blessed Cathedral in Moscow, blue wild donkeys in a greenand- red landscape, a couple of abstract compositions, portraits of women, and a landscape with copper-red buildings against the backdrop of a black sky through which soars a golden aeroplane.

Gayatri Manchanda dives back into the wardrobe and from a chest retrieves an armful of watercolours, which she spreads across the bed. Again, abstract pictures and dancing Indian women. Dancers and musicians seem to be among her favourite subjects. "Each dance has a different convention about the movements," Gayatri says. "If the dance is more formal, you have to be sure that every movement is right; you cannot just cook it up." 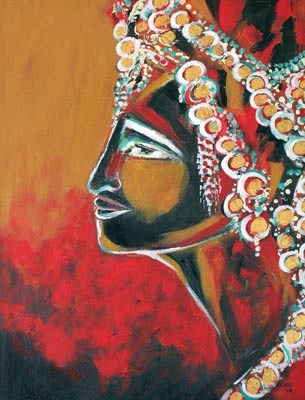 "My paintings are a permanent link to all my places," says the wife of Divyabh Manchanda, India's ambassador to Bulgaria. The two have been in Sofia since last October, but this is not their first posting in this country. They were stationed here at the end of the 1980s – and in the interim lived in Portugal, Sri Lanka, Canada and Russia.

What differences does Gayatri notice between Bulgaria in the late 1980s and now? "Only the mountain is the same," she says. The current Indian residence is in Boyana, at the foot of the Vitosha. "Nobody lived in Boyana then except Todor Zhivkov and the villagers. We never got to Boyana, we only went up the hill, to Boyana Church. There was a very nice restaurant there, Vodenicharska mehana," she says, in good Bulgarian. "I don't know how I remember the name."

So far Bulgaria hasn't featured in her paintings. "I think at some stage I would love to paint Aleksandr Nevskiy Cathedral," Gayatri says. It is her strongest memory of Sofia? "Yeah, and the Vitosha. I'm thinking of doing the mountain in a way which is not conventional, but... I tried doing it in a small watercolour, but it didn't work out. But I'll do it one day."

When Gayatri is not busy painting she likes to go downtown: "I love sitting on Vitosha Street, just looking at the passers-by." 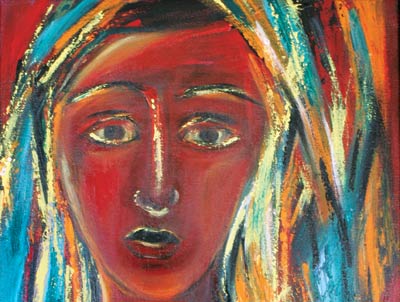 To visitors to Sofia Gayatri would recommend sitting on Vitosha Boulevard, getting the city beat and, of course, strolling to Aleksandr Nevskiy and the area around it. But she adds: "Rila Monastery and Plovdiv are a must. And I like Veliko Tarnovo very much."

But Sofia has some darker sides as well. "Some Indians get bashed around... And I never let the staff do the shopping alone in that big supermarket. Because when we go there, all the security guys are in our line. It happens every time and it's very uncomfortable. But I think I was more scared in Russia."

There are other things in Bulgaria's former Big Brother that do not compare favourably. One is the weather: "For me it's cold." Another is the traffic? "If you've been in Russia, there's nothing wrong with the traffic in Sofia. In Russia you could be stuck for three hours in a jam."

"I like the Bulgarians," says Gayatri, and adds: "They are the nice people that I remember from the last time. Bulgarians are straightforward and it's easy to make friends with them."

Gayatri Manchanda started painting in 1993–94, when she was in Portugal. 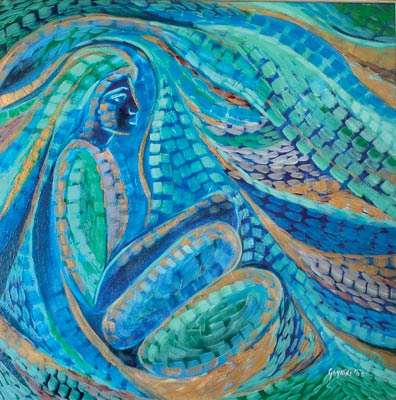 "One day I just took my son's brushes and paint box and my husband's office paper... For many years I did very bad paintings... and then I went online," she says. Gayatri, who has an MA in English, has no formal art education. Her knowledge about composition, colour harmony and watercolour technique she acquired from artists' web sites. But perhaps the most important lesson she learned by herself: "I got really relaxed when I realised that I am not a Picasso. It's a big thing to realise that you are an artist but that you're not that great. Тhen you really begin to have fun, because you have taken that pressure off yourself." When did she realise that? "Oh, very fast!" 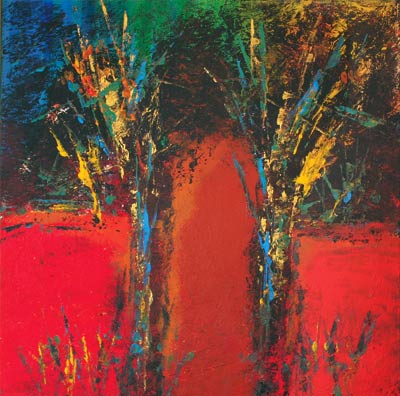 Gayatri has not kept her first attempts at painting. "I've chucked out a lot of stuff. They were so bad. You look at them after five years and you think: 'It's so bad!' But sometimes I think some of the stuff I threw away wasn't that bad. Sometimes I go to a gallery and I see something and say: 'That?! I've thrown away stuff that's better than that!' So maybe I should stop. And I also repainted a lot of my canvases. Which really I think I shouldn't have done. Not a good idea, but then I got bored with them. Some of the things I've repainted were quite nice."

Gayatri Manchanda's work will probably be exhibited in Sofia at the beginning of 2011.