Trailblazing Bulgarian sculptor chooses to persuade rather than shock

At first sight, the strangely shaped, colourful house with the transparent roof appears so surreal that the visitor needs time to realise that what they see is not a figment of their imagination, conjured up in reaction to the ubiquitous mutro-Baroque castles.

From the inside, this odd building in the village of Osikovitsa, near Pravets, about 70 km, or 45 miles, northeast of Sofia, is equally unusual. The sculptor in his studio

Welcome to Gradezhat, or the Construction, a perfectly habitable house, whose creator is not an architect, but probably Bulgaria's best-known contemporary sculptor. In November 2008, Pavel Koychev, aged 70, added this house sculpture to his portfolio. The artist, whose works appear in art galleries and private collections in Bulgaria, Greece, Belgium and the United States, has had more than two dozen one-man exhibitions and participated in numerous group exhibitions.

Gradezhat is not such a surprise, after all. From an artist famous for creating fantastic figures out of unusual materials, such as yarn, sticks, mud, straw, wax, Styrofoam or cloth, the result was bound to be unpredictable. Koychev prefers a delicate touch to inspire the imagination rather than employing the shock tactics typical of many avant-garde artists.

To create Gradezhat, Koychev had more space to play with than many architects enjoy. The total floor area of the house is 360 sq m, or 3,880 sq ft. The plot of land in Osikovitsa was given to him by Miroslav Mihaylov, an investor and fan of Koychev's work. He knew of Koychev's dream to build a habitable sculpture and commissioned him to do it. The sculptor made 1:10 scale models and all the measurements were calculated. A year later a sculpture appeared on the site.

The first floor is made of stone, like a traditional Bulgarian house, while the second and third are of wood daubed with clay and straw and whitewashed on the inside.

"I had wanted to make a sculpture house for a long time. Not a kind of Cameroonian hut, but a work of plastic art in which you can live." That Koychev was successful is clear from the silence with which architects greeted his project – they must have literally been rendered speechless. Who could blame them: the sculptor dealt perfectly with all the architectural problems.

The construction is primitive but strong. The transparent canopy shields the house from rain and snow and allows in the sun's rays at the same time. The house is comfortable with its wooden flooring, PVC windows and doors, and boasts a fireplace, a heating system, electricity and running water.

All the materials used for the interior are natural – even the bathtub, the washbasins and the toilet are made from wood. The contours of the house fit in organically with the surrounding scenery and the design and construction are completely in keeping with modern requirements.

"I wanted to make something simple, from natural materials, without concrete and extra costs. I believe that in the 21st Century houses can also be made using this eternal technology – from stone, wood, wattle and clay. The house does not have its own roof because of the complete freedom I needed to work with these materials and follow this technology." Everything in this unique home is handmade. 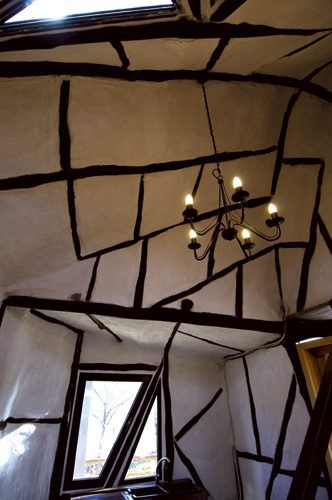 Will he continue to produce habitable sculptures? "No, I am no longer interested in this; it is like a trodden path for me. I am happy that I did something large-scale. I am proud not so much of the form – there are infinite possibilities, but of the innovative idea. I had been working on it for a long time and I knew that no such thing had been done anywhere else.

There is no modesty in Koychev's words for a simple reason – the idea of making a sculpture of wattle and mud had been in his mind since the beginning of the 1990s. Back then, he was sure he was on the right track – the materials were cheap and malleable, allowing for bold decisions regarding size, and loaded with symbolism. This is how The Dung Beetle appeared in 1994.

Nine enormous baskets of interwoven stakes and manure sprouted in the green areas around the National Palace of Culture, looking like structures created by nature. When criticised that the composition was too delicate and would be washed away by heavy rain, Koychev replied that if it was good enough, it would remain in the minds of the public. This was obviously not enough for some people; seven of the pieces of what was one of the first art installations in post-Communist Bulgaria disappeared without a trace.

Koychev's concept of a sculpture that you can also view from the inside was central for Obitalishteto, or the Abode, a joint project with architect Boyko Kadinov. The six by 10 m structure of wood, straw and manure resembling a stable or a womb with steel legs enticed visitors to enter and sit inside it. As is always the case with Koychev's work, the installation was in complete harmony with the place where it was displayed, in front of the Archaeological Museum and the Presidency in Sofia. The Abode also travelled to Brussels for the Europalia Festival in 2002. What came next was something completely different – models of colourful houses made from stone, wood and adobe. In the exhibition entitled Houses, Summer, the Sea: An Idea of a Holiday Village, the models were displayed against a background of photographs by Ivo Hadzhimishev, which showed still undeveloped corners on the Bulgarian Black Sea coast, such as Kamen Bryag in the north.

"Everything I do is a commentary on what I see," Koychev says of his work. His critical attitude to modern man's transgressions against nature is not devoid of irony. The first part of the composition of Artificialities. Something about Cloning, an open-air installation in Osikovitsa, uses real cows, sheep and visitors, while the second consists of plywood models of cows, sheep and people. In The Herd, large black bulls wade in a specially made mud puddle in front of a glitzy hotel in Sunny Beach. In A Haughty Walk, six five-metre male and female Styrofoam figures soar above a veil of foliage, their fronts clad in the latest fashions and their backs naked.

A mountain climber and one of the first to go camping with a tent in Communist Bulgaria, Koychev has a special affinity with nature and often chooses to show his work in the open air. "I find it more interesting there – you have to decide how to step into this space and what to do, having in mind that any human activity has an adverse effect outside the house."

In this respect, New York was a real revelation: "The city has been created with a flair for the monumental; you don't get to think of its large scale – it is natural." Koychev was last there in 1999 on a Studio International Programme. He took part in the World Artists at the Millennium Exhibition, staged in the UN building, together with 36 other artists aged over 60, including Louise Bourgeois, Ilya Kabakov and Kenneth Noland.

The sculptor produced three pieces made from wooden sticks and wax, plus models of larger structures designed to be displayed in the open air and, again, to blend seamlessly with the natural environment. "The waxworks made a good impression, but my things were the cheapest of all."

What is his opinion of Bulgarian art? "Our only genius is Christo; if there is a Bulgarian who should remain in the history of art, he is the one." Koychev himself has often been compared to Christo because of his innovative ideas.

Born in 1939 in Sofia, Koychev graduated from the Art School and then studied sculpture at the Academy of Art. On receiving his diploma in 1964, he decided to be an independent artist and was not a member of the state-controlled Union of Bulgarian Artists, or SBH, for the first 13 years of his career. He was not interested in the official art scene and it did not care about him either.

Those who were not members of the SBH were not invited to take part in exhibitions and did not get commissions. This did not stop Koychev's creativity, but his studio soon turned into a warehouse. Years later, these unknown and previously unseen works would become the core of an exhibition of the same name: The Warehouse.

Koychev's first commission, a composition called Motion, had a strange fate. In 1986, the Bulgarian State Railways commissioned the three-part sculpture for the train station in Blagoevgrad. The local Communist Party leader did not like the large bronze figures and they remained in a depot until 1992, when the artist brought them to Sofia for an exhibition. Several months later, the authorities in Blagoevgrad claimed them back and they now stand in front of the American University in that city.

"Back then, you could barely survive if state committees did not give you commissions or art galleries did not buy your work, but I made no compromises," the sculptor says of the period before 1989. Koychev's portfolio does not include monuments to revolutionaries or Communist functionaries. "I did not adapt my aesthetic views to the existing situation; I did what my brains and abilities allowed me to do. In the case of Blagoevgrad, the only thing I was scared of was that it would be the biggest work I had ever done."

Koychev has always had a passion for the large-scale. At the beginning of his career he designed small figures which he meant to be cast later in bronze in a larger size. This did happen with some of them. The Belgian collector of Bulgarian art, Hugo Voeten, has over 30 sculptures by Koychev, small plastic pieces made mainly before 1989 that were later enlarged and cast in metal. Apart from the bronze figures, Koychev is particularly drawn to experimentation and uses unusual and diverse materials for his innovative ideas.

In The Carrier, there is not one but four donkeys – one for each gospel – representing the animal on which Jesus entered Jerusalem, all made from thread, sticks, plaster of Paris and bronze. In Onyx Figures, two-metre tall men and women made from onyx are illuminated from the inside. Even when made from twigs, straw and clay, his compositions are both impressive and intimate.

Koychev funds his exhibitions himself and does not expect to make any profit from them. Since 1989, his only commissions have been The Herd and The Construction. "Sculpting is the ultimate luxury – you want to do something and you do it, but you have to fork out for it. This may be cruel, but it is how things are." Never one to compromise, he does only what he feels like doing and stands his ground in the same way as The Purple Buffalo, a 300 kg wooden sculpture, which could not fit through the door of any art gallery and remained in front of the Bulgaria Hall only for a single day. "This is what the climate is like these days anyway – everything is short-lived," he says. The house sculpture is an exception: "I hope it will remain when I am gone."