Bulgaria lacks well-preserved mediaeval fortresses, and the recent craze for rebuilding ancient and medieval remains into shiny towers and fortifications just adds modern insult to historical injury. Near Asenovgrad, however, on the northern slopes of the Rhodope, there is a fortress which will – almost – satisfy your thirst for authentic ruins. 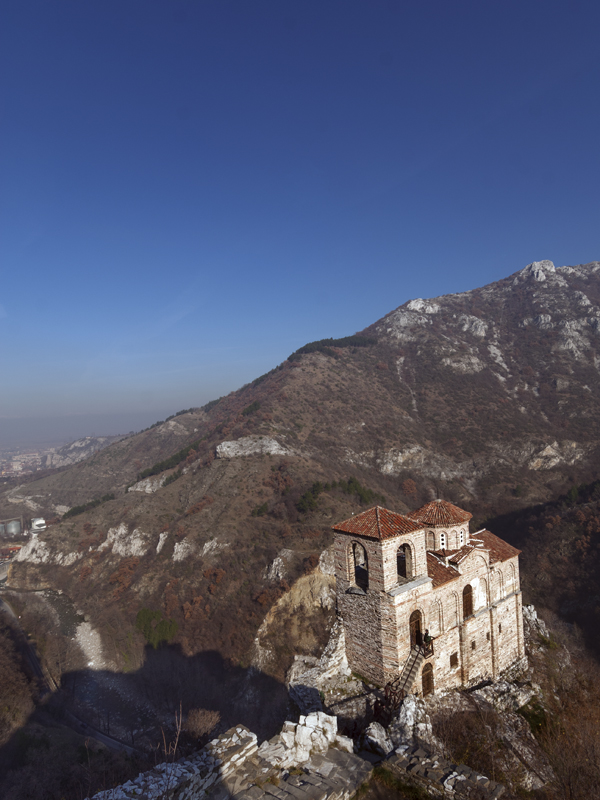 The Asenova Fortress is about 3 km south of Asenovgrad, on the road to Smolyan, and impresses from afar. A tiny church is perched on a steep rock overlooking the narrow gorge of the Chepelarska River. A winding road leads up to the height, where the remains of the castle are. The church, Holy Mother of Christ, is the best preserved building in the complex: a brick-and-mortar confection in the Byzantine style popular across the Balkans in the 12th-14th centuries.

Sadly, the enthusiasm for making archaeological sites more "appealing" for mass tourism has taken its toll here, too. Replicas of mediaeval siege engines are scattered around, and an interactive billboard advertising the fortress obscures much of the view.

Ignore this, and Asenova Fortress is still a rewarding experience, with its maze of ruins, the intricate details on the walls of the church and its 13th Century frescoes, and the vistas of the gentle Thracian plain to the north and the menacing slopes of the Rhodope filling the rest of the horizon.

Asenova Fortress stands on an easily defended rock promontory overlooking a vital route connecting the Thracian Plain with the Aegean coast. This has attracted people to the site since the middle of the 1st Millennium BC, when the ancient Thracians built a fortification here. Under the Romans, the place felt silent, as there was no need of a fort so deep into the secure lands of the empire.

When the Barbarian attacks from the north intensified, in the 5th-6th centuries, the rock regained its importance. A new fortress was built in the 6th Century, during the reign of Emperor Justinian I, who put a lot of effort into reinforcing the old and building new fortifications in the Balkans, with the aim of reclaiming the peninsula from the invading Slavs, Proto-Bulgarians and other newcomers who were eager to grab a slice of his realm.

Over the following few centuries, the fortress had several different occupants. It was called Petrich at the time, and in 1083 the Byzantine aristocrat Gregory Pakourianos gave it to the Bachkovski Monastery, which he founded the same year further upstream the Chepelarska River.

In 1083, there was no Bulgaria as it had been under Byzantine rule for two centuries. Two years later, a revolt broke out north of the Stara Planina mountains, led by the ambitious Asenevtsi Brothers, who reestablished Bulgaria as an independent political entity. In the 1200s, one of them, King Kaloyan, arrived at the gates of Petrich, and laid a 13-month siege to capture the fortress, which by that time was no longer Byzantine, but belonged to the knights of the Fourth Crusade.

King Kaloyan failed, but the region and the fortress, nevertheless became part of Bulgaria. In 1231, the king's nephew, King Ivan Asen II, rebuilt the Petrich fortress, and commemorated this with an inscription hewn in the rock. 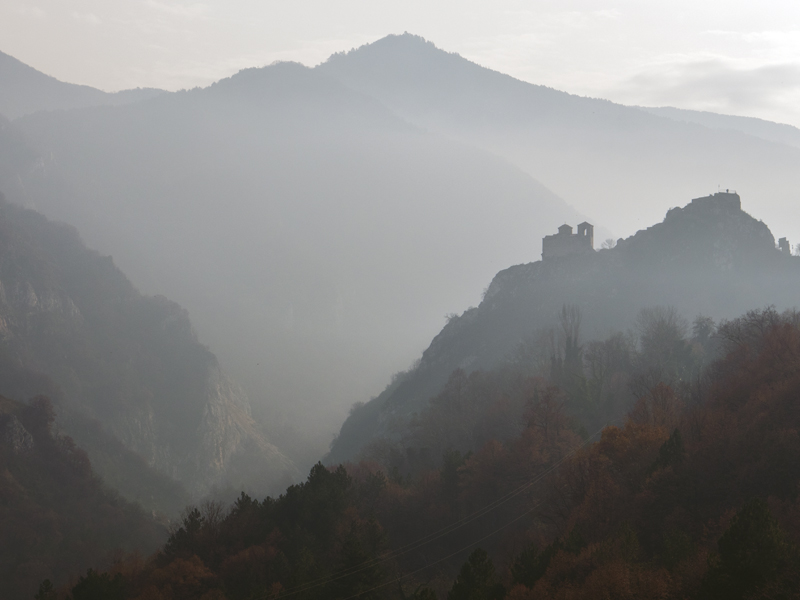 The next time the Petrich Fortress caught the attention of the world was at the beginning of the 15th Century. The young Ottoman Empire had already taken over Bulgaria, but an internal struggle between the three princes fighting for the Ottoman throne was at its height. Petrich became the battlefield between two of them – Musa had taken refuge there, while his brother Süleyman was besieging it. The latter won, and ordered the fortress destroyed. So it was done.

The only building to survive the devastation was the Holy Mother of Christ church. It remained almost unchanged and was used by the locals until the 20th Century, when it was reconstructed.

The inscription of King Ivan Asen also survived until 1883 when the mayor of Stanimaka (today's Asenovgrad) ordered that it be erased from the rock surface because the area was still under Ottoman control and Stanimaka and the area around it had a significant Greek population. For these people, the existence of an inscription where King Ivan Asen calls himself "a king of Bulgarians and Greeks" was a threat, and an encouragement for the Bulgarians in the region.

Stanimaka became part of Bulgaria in 1885, with the unification of the Principality of Bulgaria and the Ottoman province of Eastern Rumelia. Greek emigration started, voluntary and forcible, with its last big wave in the wake of the Great War.

The inscription of King Ivan Asen was hewn again, next to the place where it had originally been, and the fortress was renamed Asenova Fortress. Stanimaka became Asenovgrad.

Today, Asenovgrad is famous mostly for its numerous shops selling affordable wedding and prom gowns, which attract buyers from all corners of Bulgaria. Tourists come mainly to visit Asenova Fortress and Bachkovo Monastery, before going deeper into the Rhodope.