CONTOURGLOBAL MARITSA EAST 3: THE POWER THAT MAKES THE WORLD A BETTER PLACE

ContourGlobal Maritsa East 3 is the second largest thermal power plant in Bulgaria operating entirely with its own resources – lignite coal from the East Maritsa Basin. After a grand overhaul, which was the first in its scale in energy in Southeastern Europe performed without state funding,ContourGlobal Maritsa East 3 is the first lignite coal thermal power station in the Balkans that meets the highest European standards for safety and environmental care. With its gross power of 908 MW the plant produces 10% of energy in Bulgaria.

As a result, ContourGlobal Maritsa East 3 helps for guaranteeing the country's energy security and independence, offering competitively priced clean and reliable energy from local resources and providing quality jobs for the people in the region.

The international energy company ContourGlobal owns 73% of the company's shares and the Bulgarian National Electricity Company owns the other 27%.

Krassimir Nenov, CEO of ContourGlobal Maritsa East 3, is the right person to tell us more about the company's work and mission. He joined it in 2003 and became its CEO in 2017.

How much did the company invest in ContourGlobal Maritsa East 3 so far?

This investment is the first large-scale energy project in Bulgaria. It was the first private power sector project in Bulgaria, back in 2003. Over the past 15 years with a total investment in the plant of over EUR 700m in major refurbishment and environmental retrofit, ContourGlobal Maritsa East 3 became the first lignite coal-fired thermal power plant in the Balkans, which operates in full compliance with the highest European standards for safety and environment preservation. According to a 2002 independent study, the rehabilitation project was the best approach to guarantee the security of energy supply, the use of local resources and to meet the European environmental standards that were a prerequisite for Bulgaria's accession to the EU. Additional upgrades were made in 2012-2015 to address successfully new stricter EU emissions norms, which came into force in 2016. In short, in the past 15 years over BGN 1.4 billion were invested to guarantee the plant's reliable operation and to improve measures for environment protection.

Thanks to all these large-scale investments today ContourGlobal Maritsa East 3 provides 10% of Bulgaria's annual energy production, thus contributing to the country's energy security and independence.

Are your investments connected to the end price for the households and the businesses?

The growing liquidity on the energy exchange and the effective work of the independent regulator guarantee the balance of interests for all stakeholders. Electricity prices depend to a large extent on outside factors such as the price of the carbon emission allowances. The investment in the plant is being repaid over the life of the long-term offtake agreement for the power sales. Thus the company assumes full responsibility and manages the risks connected to the plant's operation and maintenance. I would like to remind the readers that ContourGlobal Maritsa East 3 reduced the price with 15% in 2016, thus contributing to the energy sector reform.

What is the new model in the energy sector and how do you plan to meet the difficulties that full market liberalisation pose?

Full liberalisation of the market, as required by EU regulations, is a key priority of the Bulgarian government in the energy sector. ContourGlobal Maritsa East 3 is fully supportive and has always worked in close co-operation with all stakeholders while strictly observing all financial agreements, including with the National Electricity Company.

There are many regulatory and market flaws that prevent energy markets not only in Bulgaria from recovering fixed and capital costs to producers which can impact security of supply. Besides, the Bulgarian free market is influenced by a number of specific factors that additionally distort the market prices. Without additional supporting mechanisms there is a tangible risk for the operation of lignite thermal power plants. This is why many EU member states find a way to ensure the financial condition of conventional producers that guarantee the security of supply. Such capacity mechanisms were already introduced in the UK, Germany, Italy, Poland, Belgium and Greece.

The responsible institutions clearly state that producers in the Maritsa East complex are crucial for the security of supply and social security in the region, and voice the need for measures for overcoming the challenges of the free market. I believe that such mechanism can be implemented in Bulgaria as well. 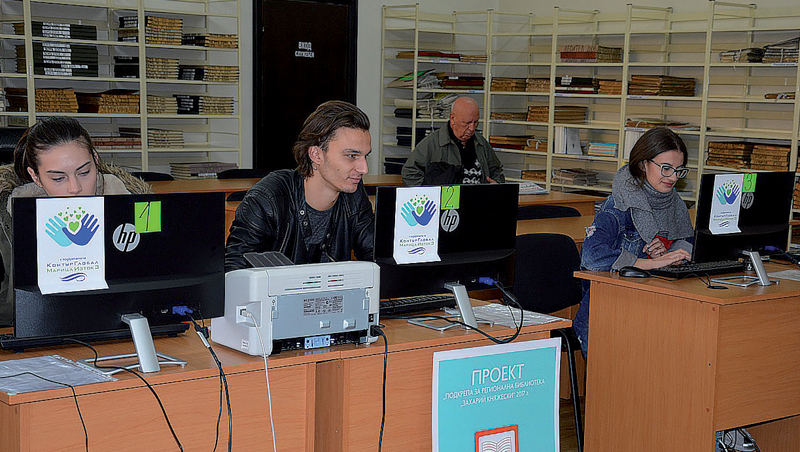 Libraries in Stara Zagora and Galabovo

What is the future of coal in a society that is increasingly interested in low-carbon energy?

It is an important topic for Bulgaria as it directly affects all plants in the Maritsa East basin, which produce about 45% of the country's electricity. The coal plants of the Maritsa East complex are crucial for the security of supply and energy independence of the country. They significantly contribute for Bulgaria's leading position on the Balkans as a net exporter of energy.

Besides, Bulgaria has significant reserves of lignite coal allowing production for years on end. This must be considered when planning the country's energy future.

We also have the most advanced plants for lignite coal in the region. They are able to provide a smooth transition to low-carbon energy production in the future.

This is why I believe that in the foreseeable future the sustainable operation of the power plants in the Maritsa East complex will be good for the country's energy sector and economy. 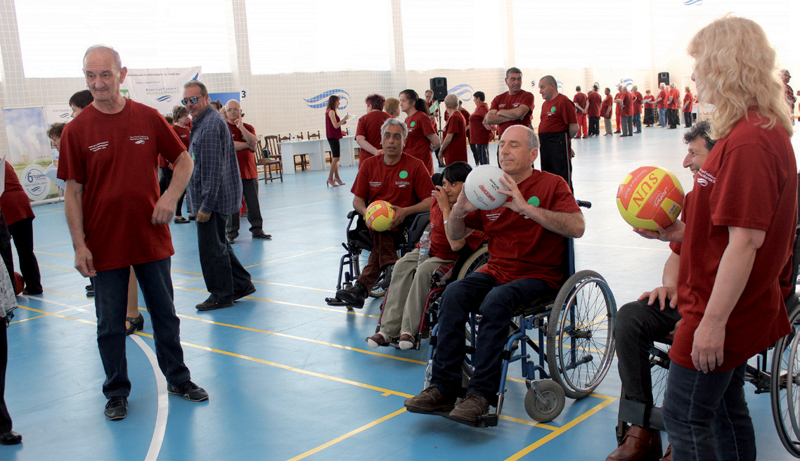 Sport games for people with disabilities

What is your social responsibility policy in regard to the local community?

One of the crucial criteria for the effect of our programme for corporate social responsibility is the direct feedback from beneficiaries among the local community. This bond is of utmost importance to our team and we are doing everything possible to keep it alive and stable. As a result, we have developed sustainable and reliable partnerships with these communities.

In the past 5 years alone ContourGlobal Maritsa East 3 invested over BGN 3 million in the Stara Zagora region, realising a number of infrastructure and social projects in Galabovo, the surrounding area and Stara Zagora itself. Since 2012, the power plant, following a long-term agreement with Galabovo Municipality, invested over BGN 2 million in order to develop and successfully realise over 10 projects in social infrastructure and sports facilities. These include an overhaul of a kindergarten in Galabovo for BGN 390,000, an overhaul of the social facilities in the villages of Obruchishte, Mednikarovo and Iskritsa for BGN 500,000. Over BGN 700,000 were invested in the renovation of Galabovo's sports centre, where for 5 years we have supported sports games for people with disabilities. In addition, we invested BGN 640,000 in Ezeroto Park in Galabovo. ContourGlobal Maritsa East 3 is a major sponsor of an emblematic event in Stara Zagora, the Jazz Forum. Under an internal project "Payroll Donation" our staff is incentivised to support social causes like scholarships for orphaned students, support for children deprived from parental care and others, as our company doubles their donations. Under this umbrella, we and our team have invested over BGN 250,000 in socially important activities over the recent years.

ContourGlobal Maritsa East 3 also partners with many social institutions for projects that support local communities. The company designed and built the visitors centre of the Green Balkans Rescue Center for Wild Animals. It welcomes over 3,000 visitors every year. In 2018, we built together new and modern homes for patients and residents of the Centre, equipped with video technology and everything needed for successful treatment and reproduction of endangered species. We also lend a hand in other fields. ContourGlobal Maritsa East 3 donated a modern cryostat AST 500 to the Stara Zagora Oncology, the only hospital of this kind in all four districts. We also donated a new incubator to the neonatology unit of the Stara Zagora hospital.

Our latest project was the creation of a Teen Zone in Stara Zagora's regional library. This establishment is equipped with computers, multimedia, e-books, board games, books and comics that are suitable and interesting to young visitors and has an excellent internet connection. We funded entirely the overhaul and the equipment with about BGN 40,000 from the social project Energy for the Library, which we developed together with the team of the Regional Library.

How does the Maritsa East complex improve the lives of local people?

Over 20,000 experienced workers are employed in the companies of the Maritsa East complex. They live in 60 municipalities in the Stara Zagora region and neighbouring regions and work around the clock to supply about 45% of the energy in the country. It is produced entirely from local resources, a key factor for Bulgaria's energy independence. As a result of our work, there is a significant beneficial effect in regard to jobs, tax and social security revenues. Last but not least, the companies in the complex are strongly engaged in improving the life of local community via social projects with high added value.

Care for everyone working at ContourGlobal Maritsa East 3 is of primary importance to us. Operational excellence and focus on health and safety contributed to the impressive number of 10 million man-hours worked to date without a Lost Time Incident. 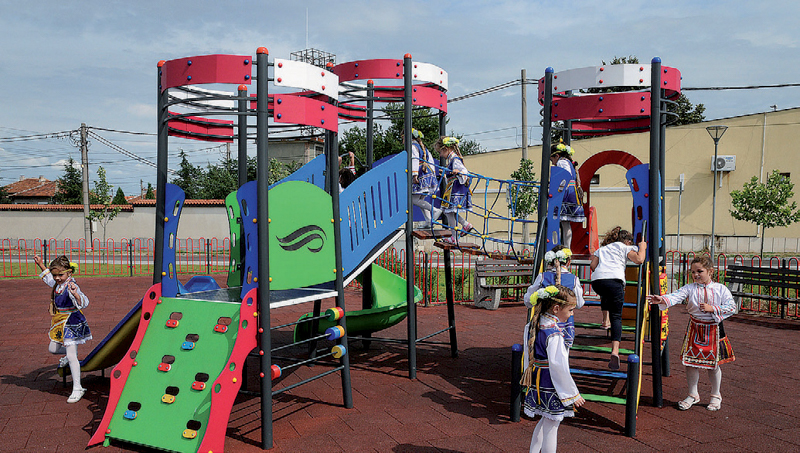 A park in Galabovo