Alexander Daw, founder and director, on the importance of sustainability and masterplanning in architecture

When talking about quality and innovative design on Bulgarian soil, SGI is one of the first names to come to mind. Since its foundation in 2009, the Bulgarian branch of Stephen George Architects has consistently demonstrated that local architects can create architecture and masterplanning solutions that are aesthetically pleasing, comfortable, and sustainable and can compete with the best in Europe given the right circumstance and work ethic culture. SGI is now one of Bulgaria's largest architecture and design studios and works with both local and international clients from its office in Sofia.

It all started in 2009, when a British architect, Alexander Daw, became the founder of SGI Bulgaria. Today he has over 20 years of experience in the construction industry from onsite delivery of buildings to architecture and masterplanning and property development. In SGI he is responsible for the development of the company in Bulgaria and as of recently the rest of the global market.

How did you arrive in Bulgaria?

I arrived here a few years before SGI did. There was never really a grand plan but a sequence of events that lead to where we are now. Fifteen years ago, my then girlfriend returned from a visit to her family who lived in Bulgaria and told me she had bought a house near Veliko Tarnovo. Back at the time I had not had any reason to learn much about Bulgaria and in the UK the concept of buying a house for 10,000 euros was unheard of. That was my first introduction to this country. A random trip to a small village outside Veliko Tarnovo.

I remember driving around Bulgaria for the first time and thinking that in parts it looked Third World. But when on my first morning in Veliko Tarnovo I woke up and saw this amazing town, I thought 'my God, this is amazing.' I still have this sort of relationship with Bulgaria, of a place yet undiscovered. I have a family and children now, so I don't have as much time to explore, but I do enjoy that here you still have the sense of space, particularly in north central Bulgaria.

So, we bought a house and started to return here for short trips. A British developer gave me a project to design, we then decided to spend a year here. As I started picking up work, for Bulgarian clients as well, we moved my office here. Then I met a Spanish architect. He is one of the most important people in my life. He had a major career in Madrid and Barcelona and held a professorship in regional planning in Spain for five years. When he retired he travelled and somehow ended up in Arbanasi. He loved it, he was living there in this villa overlooking the Stara Planina Mountains. When I met him, he had just started working on designing a golf course and country club in Arbanasi. In hindsight it wasn't a brilliant idea, but the setting was just amazing. Arbanasi's architecture is very interesting, these fortress houses are unlike anything else in the world. They are the built language of the history of Bulgaria, they actually embody the history in plain site. And there is the location, which is just jaw dropping, looking directly south to these rolling hills.

We spent three years working on that golf course, but also on other projects, including a masterplan proposal to the municipality of Veliko Tarnovo.

That was a strange period. I ended up in Veliko Tarnovo for five years, working with a genius Spanish architect who took me as a sort of apprentice really and taught me how to be a real masterplanner.

How did you become the founder of SGI Bulgaria?

When the 2008 crisis came we found that we did not know what to do. Return to the UK was impossible as there was no work there. I was considering some unappealing job proposals in China and Lagos when Stephen George Partners started looking to enlarge their practice with the opening of Stephen George International offices in China, Oman and Eastern Europe. Before choosing Bulgaria they had looked at all the usual suspects, like Romania and the Czech Republic. They chose Bulgaria because there were no other large international practices present. As I had the local experience and the track record, they chose me for their operation here. Then we selected Bulgarian Tihomir Kazakov as a partner. SGI Bulgaria opened in 2009 allowing us to utilize some of the best masterplanning minds in the UK. For the first four years I worked closely with Stuart Richardson, one of the UK's preeminent masterplanners at the time. We did a lot of international work in Oman and work back to the UK from Sofia which gave the new team immediate exposure to an international way of approaching architectural design and process on a large scale.

The first four years were difficult because of the recession, but our visualisation department kept on growing and helped us to pass through the starvation phase. The first major project that we landed was Airport Centre Sofia, as at the time the developer was trying to cut costs from other international architects.

Now we are one of the top five practices in Bulgaria.

What is your most interesting project so far here?

There are some. Garitage Park in Sofia, for example, is the first community in Bulgaria of this type and scale to combine residential buildings, offices, commercial areas, educational, sports and recreational facilities. It is also the first project in Central and Eastern Europe to undergo the BREEAM Communities certification process for social, economic and environmental sustainability of the construction process. 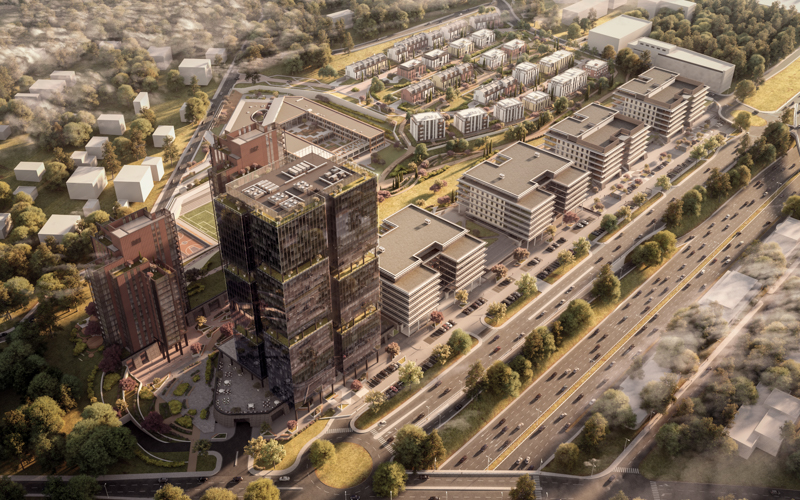 How is SGI different from other local companies?

The main thing is the way we deliver our projects. We are very structured, we are used to working for international clients under international standard of delivery. The challenges we have here are quite a lot and you have to be able to adapt, because big scale clients do not want to be told what to do.

If there is a difference between us and our competitors it is our adaptability and structured delivery. We have separate divisions for interior design, sustainability, masterplanning. We have people who generally do more conceptual work, and staff who generally work more on the delivery side. We operate as a real partnership, design is very much an inclusive process within the office.

Our practice revolves around the people. We want to give our staff a good career, to make sure that they can have a comfortable life so they can excel in their job. If they aspire to it, they can eventually become partners in the company. This is unusual in Bulgaria, where on the whole architecture is a hierarchical business model.

We also promote sustainability even when the client is not too enthusiastic about it, we try to get them to see that it can improve their business model as well as the environment.

What approach do you apply with clients?

When a client comes to our office we recognise that the design has to serve their business. So the first thing we do is to see what they want to achieve financially and how they plan to achieve it. We then discuss how they can get what they want at an optimal cost in the most reasonable and responsible way. This is when sustainability comes in. It gives you guidelines how to answer responsibly to a client and how to set a benchmark for quality in delivery and benchmarks for process as well. This is our business profile. 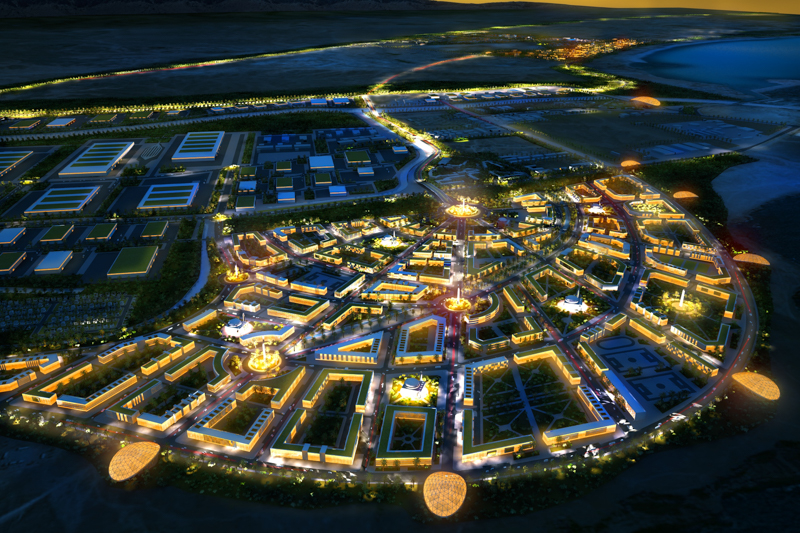 What does a good masterplanner consider in a project?

You need to think about how the project and its inhabitants will communicate with each other and the surrounding environment, how all the different parts of a plan relate to each other and work together.

In Garitage Park, for example, there were several elements we had to consider. The project is surrounded by a relatively exclusive residential area with retail elements and office facilities and across the ring road is Sofia Business Park.

Garitage Park also has complex internal dynamics as it incorporates a school and school facilities, low and high-rise residential areas, commercial offices and retail spaces. Some of these elements, like the school, require public access and others have to be private. There is a conflict that has to be resolved.

As a general rule when you design masterplans you have to minimise the impact of cars, to make things as pedestrian-friendly as possible with facilities accessible by foot. You have to enforce social interaction, to encourage people to go out of their homes, to meet their neighbours, to be secure so that children can play outside safely.

Can you give more examples for SGI masterplanning you have done in Bulgaria?

The Kamenitsa Hill project in Plovdiv. It will be the first luxury mixed-use development in the centre of the city. It is different from Garitage Park as it is centrally located and not in the outskirts. It is a rare thing for a developer to build a whole new neighbourhood within the centre of a city as ancient as Plovdiv. 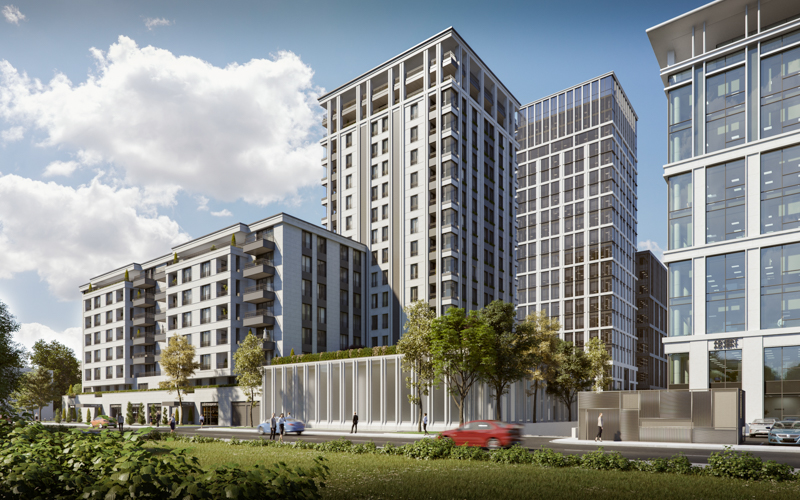 Usually, such sites are closed to the public and are 'gated.' The Kamenitsa Hill developer was open enough to accept our proposal that the project, which is about 300 metres from Plovdiv centre, should allow outsiders to pass through it, while limiting the security to the buildings themselves. It is not necessarily a place to go, but a place to pause within the cityscape. And this is what is important with masterplanning to connect spaces in a way which connects the city in an engaging way.

On what kind of international projects does SGI work on?

We do quite a lot of work from here to the UK. We have worked in Oman, on the Salalah Free Zone. This is a sort of project that combines residential, commercial and industrial parts, a new city, actually. A proper exercise in masterplanning. In this case we had to create a concept that would minimise the impact of flashfloods that occur regularly from the nearby mountains. We were then commissioned to design some of the buildings in it.

We have worked in Moscow and we are currently working on competitions in the UK and the Czech Republic.

One of our strongpoints in international projects is the design of large scale industrial and warehouses schemes. The UK's significant experience in this area means that we, as a company, have valuable expertise. Sometimes we do such projects in partnership.

Interior design is another of our strengths in international projects. Our team in Bulgaria has designed the offices of international giants outside the country such as Skyscanner, Booking, VMWare and others.