FROM ANDALUSIA TO THE ORIENT: ENCOUNTER OF CIVILIZATIONS. EXHIBITION WITH A SENSE OF PLACE

There are exhibitions that are static, or motionless – no matter how great they are. There are also exhibitions that evolve together with their venue and the public. Exhibitions with a sense of place and movement. From Andalusia to The Orient: Encounter of Civilizations is such a "living" exhibition. It is a platform for debates, an educational tool and an environment for entertainment. It is an open format that permits different interpretations of the main theme in each city where it appears.

Currently, until 23 February 2018, the exhibition is hosted in the beautiful Bayrakli Mosque in Samokov. In this richly decorated gem of architecture, the interpretation of the musical encounters between East and West, and the winter version of the "Journey of Tastes" at the City Art Gallery were only the beginning of the presentation of the exhibition in Samokov. An entirely new part of it was created to illustrate the rich history of arts and architecture during the Ottoman period in the city, including artefacts from the Ottoman Period, never exhibited before. The Embassy of the State of Palestine in Bulgaria offered six precious objects, beautifully handcrafted from mother of pearl, for the entire duration of the exhibition From Andalusia to The Orient: Encounter of Civilizations in Bulgaria.

The "Journey of Tastes", the "Journey of Words", the "Human Bridges", and the "Journey of Sounds" (part of the interactive elements of the exhibition) take shape of public events that are returning to Samokov and Plovdiv (with official opening on 15 March, at Banya Starinna Gallery) on a monthly basis. Guests (musicians, chefs, calligraphers, artisans and experts) from Italy, Spain, Morocco, and other countries, attracted through the cooperation between cultural institutions, embassies and private companies, will add yet another dimension to the exhibition. 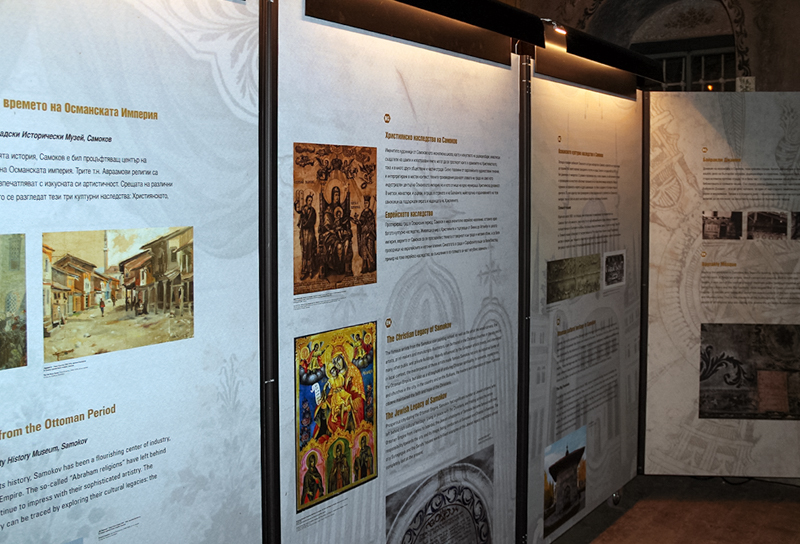 Revealing different aspects of the encounters between West and the Orient in the domain of arts, fashions and mores, the lecture series, presented at the IEFSEM-BAS headquarters in Sofia, the Samokov City History Museum and in Plovdiv will attract scholars and general public alike. A concluding international conference (Sofia, May 10-12, 2018), will gather partners, scientists and experts to explore the theme of the East-West encounters of civilizations and contribute to the understanding of today’s multicultural Europe.

As a part of an EU Culture Programme, the exhibition From Andalusia to The Orient: Encounter of Civilizations is fulfilling its goal to enchant and educate the public on the theme East-West relationships. In Bulgaria, the project goes beyond – it morphs into a true cultural diplomacy experience for everybody involved.  By creating a sense of place from the Mediterranean's rich history of cultural exchanges at all venues in the country, it becomes a true living exhibition.

The Dome of the Rock on the background of the mihrab in Bayrakli Mosque, Samokov. Mother of Pearl. Curtesy of the Embassy of the State of Palestine, Bulgaria © Photography: Evgenia Troeva-Grigorova IEFSEM – BAS

This publication is partially sponsored by the Culture Programme of the European Union 2007-2013.

Read 687 times
Published in Talk of the Town
More in this category: « VILLA VUCHEV: A LUXURY VILLA IN THE WESTERN RHODOPE WELCOME TO HOLIDAY & SPA EXPO 2018 »