Twenty years and 10 million packages – that is the bottom line for the presence of international logistics company DHL in Bulgaria.

Having opened its first office in the country back in 1991, now the company has 54 offices and is one of the leading carriers here as well as worldwide. And the tendency is upwards, too – at the anniversary press conference DHL announced that it is planning to turn the Bulgarian office into its local distribution centre for the Balkan region. This means several million leva of investments, as chief executive officer of DHL Express Europe John Pearson said to the media. 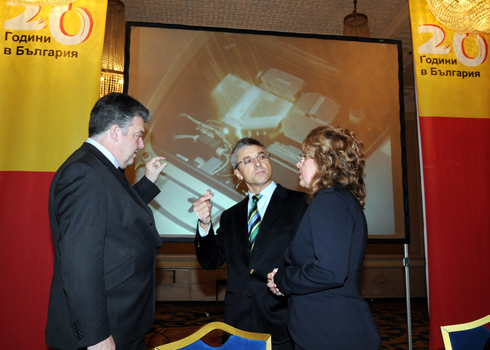 The Bulgarian office of DHL serves about 10,000 corporate and individual clients with more than 350 personnel, but the plans for the future will boost this number significantly and send a lot of employees to get additional qualification. DHL invests regularly in equipment, technology and vehicles, and aims to reduce its ecological impact by renovating its car park worldwide – starting with Bulgaria with the GoGreen programme. Among the company's other campaigns are its social commitments such as support of Sofia centre for autistic children Tacitus and dormitory school for children with eyesight problems Louis Braille.

Read 2436 times Last modified on Tuesday, 21 January 2014 15:47
Published in Talk of the Town
More in this category: « MERRIER CHRISTMAS WITH I CAN TOO I CAN TOO GETS INTERNATIONAL »