Geoffrey Keating, the Irish ambassador to Bulgaria received the Stara Planina Order First Degree, the highest Bulgarian state order that can be bestowed upon a non-Bulgarian. President Georgi Parvanov decorated Geoffrey Keating at a ceremony in the Office of the President a few weeks before Keating and his wife, Jane, were scheduled to leave Bulgaria for good. 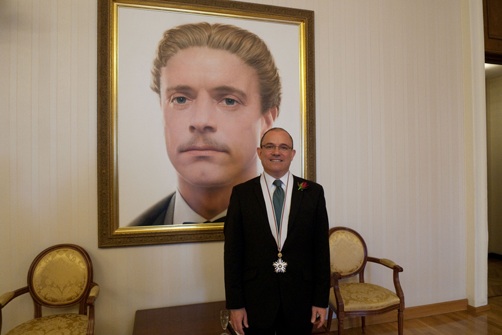 Keating received the award for his contribution to the development of the cooperation between Ireland and Bulgaria.

"Through the past five years my wife and I travelled in the country a lot, and we got to know the friendliness and the hospitality of the Bulgarians. We started many friendships. We will certainly come back every time we have the chance."

Geoffrey Keating was the first ever resident Irish ambassador to Bulgaria. He also acted as a non-resident ambassador to Georgia and Armenia. During his term Ireland emerged as one of the top 15 foreign investors in Bulgaria.

Read 5036 times Last modified on Monday, 27 January 2014 13:37
Published in Talk of the Town
More in this category: « HOW TO SPEND AN UNFORGETTABLE SUMMER SUMMER SEA FOOD MENU AT GRAND HOTEL SOFIA »