TO THE EMPEROR’S PASS AND BACK

It's a Sunday and with nothing else to do in Sofia, it is the perfect time to visit Trayanovi Vrata, or Emperor's Traian Gate, Pass with a brand new Mazda3.

OK, everyone who has ever travelled on the Trakiya Motorway knows the place: it is the tunnel which comes a few kilometres after Ihtiman. Some people like it because of the Turkish restaurants around, and others love it as it is the psychological border where Sofia ends and the world of travel, leisure and sun begins. However, we want to see the real pass, a narrow crevice which for millennia have funnelled the traffic between Central Europe and the Bosporus. There is also an ancient fortress there.

So, in the afternoon, we sit in the smooth interior of a Mazda3, stretch our legs, turn the volume of the 6-speaker sound system on and try to act cool, as the aggressive design of the hatchback is definitely a headturner.

We're on the Trakiya Motorway and it begins to drizzle, but we don't care. The 2.2 CD engine roars gently, ready to show off its 150 horsepowers and the 2-zone automatic air-conditioning turns the inside of the car into a warm cocoon. It is a smooth ride. The hatchback obeys as if not reacting to your movement, but to your thoughts. We almost break the speed limit as the Mazda3 accelerates easily but you don't feel the speed at all. The rear vehicle monitor indicating that someone is overtaking you flashes from time to time, making the driving easier and safer.

Actually, we are so absorbed in the driving, that we almost miss the brown road sign for Trayanovi Vrata and exit the highway in the very last second. Happily, the Mazda3 sits stable on the road.

The road to the old Trayanovi Vrata pass is narrow and although its condition is not exactly poor, it is clear than no one takes care of it. We don't care either, as driving a 6-speed automatic is a pleasure and the drizzle is now over. The sky is clear and the bends of the road are flanked by wet dark-green firs and grey naked oak. 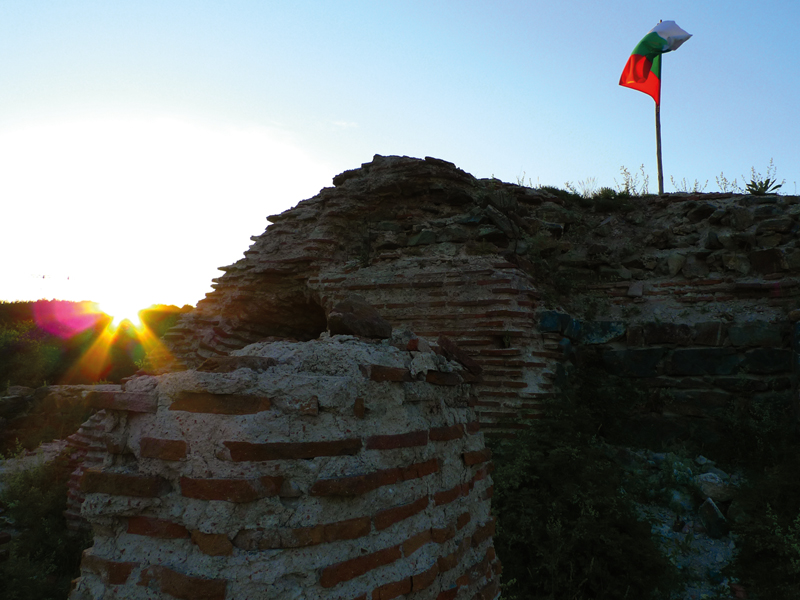 And here they are – the walls of the ancient Trayanovi Vrata fortress with their red-and-white stripes of bricks and mortar. From the highest point, a national banner is flapping on the wind. We disembark and wander around what has remained of one of the most important fortifications in the ancient Balkans.

Trayanovi Vrata was the place which guarded the Thracian Plain and the hinterland of the Bosporus from invaders coming from the west – and vice versa. The Romans built through it their famous Via Militaris which eased the movement of troops across the huge empire.

When the Middle Ages outplaced Antiquity, the pass remained strategical and both the Bulgarians and the Byzantines called it the King's Pass. In 986, it was here where Bulgarian King Samuil defeated Byzantine Emperor Basil II.

The pass was named after Roman Emperor Traian quite late, in the 15th Century, by a Western traveller passing through what was then the young Ottoman Empire. The name stuck, probably because of the mighty look of the ancient ruins.

What we see today is only a chunk of these ruins, but the sunset does the trick and our imagination freely recreates the plan of the fortification and all the drama it has witnessed through the centuries. Soon, the darkness falls and it is time to sit up again on the comfortable seats of the Mazda3, make a U-turn and head back to Sofia.

The fog descends suddenly covering the landscape with its blinding greyness but we switch on the fog headlights and continue as if the visibility were better. The mists dissolve soon after entering the highway and within minutes Sofia shines in the distance.

We feel a bit sad when we park (extremely easily, with all the sensors involved) as a great short trip with a great car is over.

Read 8612 times Last modified on Wednesday, 27 November 2013 14:54
Published in Fun in Bulgaria
More in this category: « THE PLOVDIV PLEASURE MAKE THE RIGHT CHOICE »