CRISIS AS AN OPPORTUNITY

Vassil Christov, CEO of Fibank, on the future of the Bulgarian banking system and the importance of new technologies

What doesn't kill you makes you stronger may sound like a cliché but Vassil Christov, CEO of Fibank, Bulgaria's largest locally owned commercial bank, has seen it in real life. In 2014, there was a run on the bank. After a nightmarish week, the institution managed to recover and now is restructured and healthier than ever. It has repaid the state liquidity support, has grown and invested in new technologies. Mr. Christov has been on the Managing Board of Fibank since 2010, and in 2012 was distinguished as Banker of the Year.

Fibank implemented a new organisational structure with the assistance of the International Finance Corporation (IFC). What were the changes and how did they influence the bank's operations?

In 2010, Fibank invited the IFC of the World Bank as an advisor on corporate governance and risk management of the bank. With their assistance we began a process of improving corporate management, internal regulations, credit and management risks. Part of the process was introducing changes to the bank's Board structure. In 2014, the IFC performed due diligence on the progress of implementation of their recommendations. Following that, new functions and a complete C-suite including the positions of CEO, CRO, CFO, CCO, COO, CCBO, and CRBO were introduced. This helped us clearly define the organisation of different structures and responsibilities in the bank. The CEO has a balancing function, concentrating on the general vision of the bank's future. This change is already bringing results as goals are more clearly defined, implementation is faster, and there is no conflict of interests between the different structures in the bank.

In what direction is Fibank heading after repaying the state liquidity support?

2014 was a year of a huge distress for Bulgaria's banking and financial system, and many challenges needed to be addressed. The criminal attack against the system’s stability particularly affected Fibank, the largest locally-owned commercial bank. We went through a week of clients lining up to withdraw their deposits, and in the last day we paid out about 1 billion leva. However, our high liquidity levels, the loyalty of our clients and the decision of the European Commission and the Finance Ministry to provide us with 1.2 billion leva of financial assistance helped the Bulgarian banking system avoid the worst. By the end of 2014, we had repaid 300 million leva of the liquidity support and in the following 18 months we strictly followed the restructuring plan approved by the European Commission, with Bain & Company as an independent monitoring trustee. In May 2016, we repaid the final instalment of the state assistance.

The events of the past two years have only made us stronger. Now we have 1.1 million individual clients and 150,000 corporate ones which is more than we had in June 2014. We have increased our deposits from individuals and households.

We have fulfilled our commitments to the European Commission, and implemented new forecasting tools and pricing tools that improve the ability of the bank to evaluate its internal resources and the risks of its clients, and to reflect those risks in the product pricing.

Now the bank is in better condition than ever and this is also valid for Bulgaria's banking system as a whole. Banking is one of the country’s best developed, most technologically advanced, and most strictly regulated industries.

How does this look against the background of the upcoming stress tests for the Bulgarian banking system?

In Fibank, the stress tests started back in 2014 and our liquidity stress test was not just theoretical, but in real life. We saw hands-on how our internal rules and evaluation of the potential risks of the system worked. And they did work. We passed the stress tests successfully. Asset quality is also a part of the ongoing stress tests. Our monitoring process includes daily monitoring of the large exposures and concentrations. These are all connected to the asset quality. We are now much more prepared in this regard. Last year we also changed our auditor, appointing BDO as the new auditing company. The results of the audit of our financial statements also demonstrated that the challenges we went through had made us better and stronger. 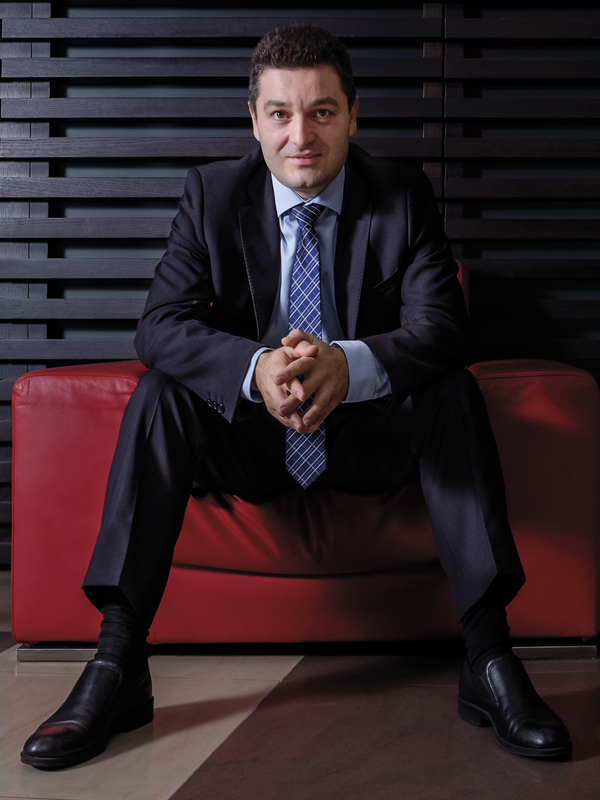 How do you expect interest rates on loans and deposits to change?

Most analyses forecast further decrease in interest rates on loans and deposits but I believe that its pace will slow down and at a certain point rates will stay more or less the same. This is connected with interest rates all across Europe due to the currency board in Bulgaria and the foreign ownership of many local banks. Bulgaria is not in the Eurozone but is a part of the European economy. Our country was not obliged to pass the asset quality review but it decided to do it anyway, as this will bring us closer to the European banking standards and levels of banking products.

Fibank is also broadening its network.

For the 23 years of its existence, Fibank has been growing organically and this trend will continue. One exception was the acquisition of Union Bank in 2014 when, in a remarkably short time, we integrated an entire bank, complete with its accounting system, corporate policies, loan portfolio and branch network. We have one of the most effective multi-channel distribution networks in the country with 162 branches all over Bulgaria, and also with presence in Albania, Cyprus and Macedonia. Fibank was the first in the country to launch a completely virtual bank branch, its own call centre, as well as a digital credit card. We also have an e-shop so that our sales infrastructure is quite well developed.

We believe that in the near future the Bulgarian banking system will see a significant number of consolidations. In the following year, probably 20 percent of the assets in the system will change their owners and, with the assistance of our partners, we plan to be among the leading players in this process. We are interested in expanding our Albanian network, and in penetrating the Serbian and Romanian markets. We expect our client base to grow even further, and growth as a rule goes hand in hand with implementation of new products, including the so-called FinTech that will help us go beyond traditional banking. One of Fibank's priorities is to remain among the most technologically advanced banks. Some of our new technologies will go live by the end of this year. Our clients will enjoy worldwide service 24 hours a day, 365 days a year. In brief, in our future development we look ahead to new technologies and development of new markets.

Read 2925 times Last modified on Wednesday, 29 June 2016 13:12
Published in Business
More in this category: « FOUND IN TRANSLATION KNOWLEDGE IS POWER »