The builders' inscription is explicit. The 100-metre-long five-arched stone bridge over the Struma River is the work of Ishak Pasha, Grand Vizier of Sultan Mehmed II the Conqueror. Ishak Pasha built the bridge in 1469-1470 to facilitate travel from Constantinople to Skopje and the western Balkans. 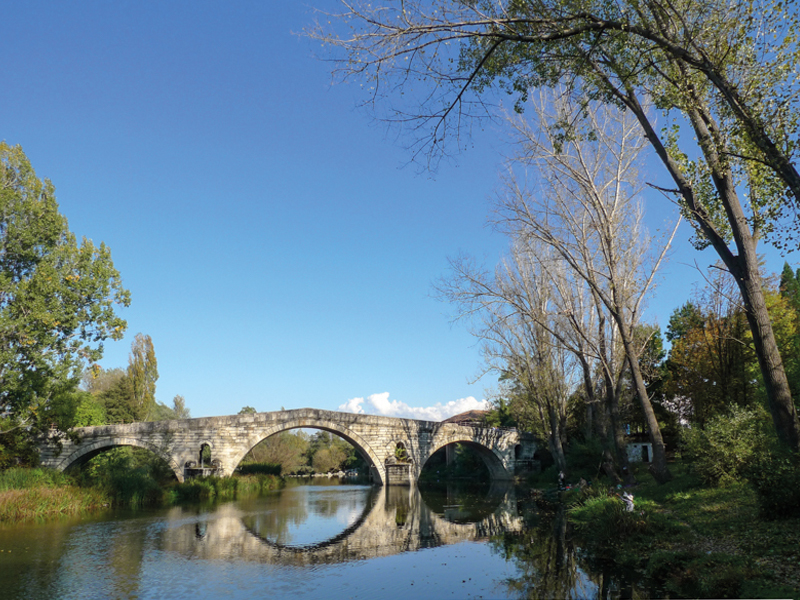 Despite this, the stories that locals have told about the construction of the bridge over the ages have no reference to the name of the man who did this good deed.

The elegant structure in Nevestino village, near Kyustendil, is known by two names. One is Kadin Bridge, the other Nevestin Bridge and, although the root of the former is a Turkish word and the latter a Bulgarian, both words mean the same: a married woman.

The explanation is contained in the typically popular legend told about so many Ottoman bridges in the Balkans. The protagonists in the local version of the story are three brothers who were builders. They started to build a bridge over Struma, but the work did not go smoothly. Each night an unknown force demolished everything they had built during the day, and every morning they had to start again.

Finally, the builders realised that the bridge needed a human sacrifice, and so the three agreed to entomb in the foundations of the bridge the first person to pass by on the following morning.

The elder brothers told their wives about the agreement but the youngest decided to play fair. On the next day his young wife came to the bridge to bring his lunch.

Neither the builder nor his wife protested against their fate, and carried out their roles in accordance with tradition. He built her into the bridge, and she asked him to leave one of her breasts uncovered so she could breastfeed their child.

A short time later the bridge was finished.

The legend had a great influence on the people of the region. The nearby village was named Nevestino and, in the 1880s, the Czech traveller and historian Konstantin Jireček learned that breastfeeding women in the vicinity would break off small pieces from a certain stone in the central arch of the bridge, boil them in milk and drink the liquid, believing this would boost their milk supply.

Jireček also heard another, more spectacular legend about the building of the bridge, which maintained that the bridge built itself. A heavy iron rod, moved by no visible force, broke pieces of stone from the surrounding mountains. The rocks moved to the construction site on their own, and took their places. When the bridge was ready, the stones that had already been broken but had not yet reached the river froze in their places. Local people said that the iron rod could still be seen on one of the hills outside the nearby town of Kyustendil.

Another legend about the bridge has nothing to do with miracles. When Sultan Murad (it is unclear which of the five rulers with this name is referred to) was passing through the surrounding area on his way to some war, he came across a Bulgarian wedding party. The law required the wedding guests to stand aside to make way for the Padishah and his entourage. However, the wedding guests did not move and the bride approached the sultan and made a low bow. Enraptured by her boldness, the Padishah offered her a gift. The young woman asked that a bridge be built at this spot, and her wish was granted.

All the legends, however, overlooked a crucial detail of the history of Kadin Bridge. When Jireček examined the structure he found a stone from an ancient building that had been incorporated into it. The inscription on the surface was almost completely illegible, but Jireček still managed to decipher the word "Pautalian." The stone had been taken from ancient Pautalia, a once prosperous Roman town that existed where today is the town of Kyustendil.