Going home for the holidays? Set aside at least half a day for Sir John Soane's Museum in London 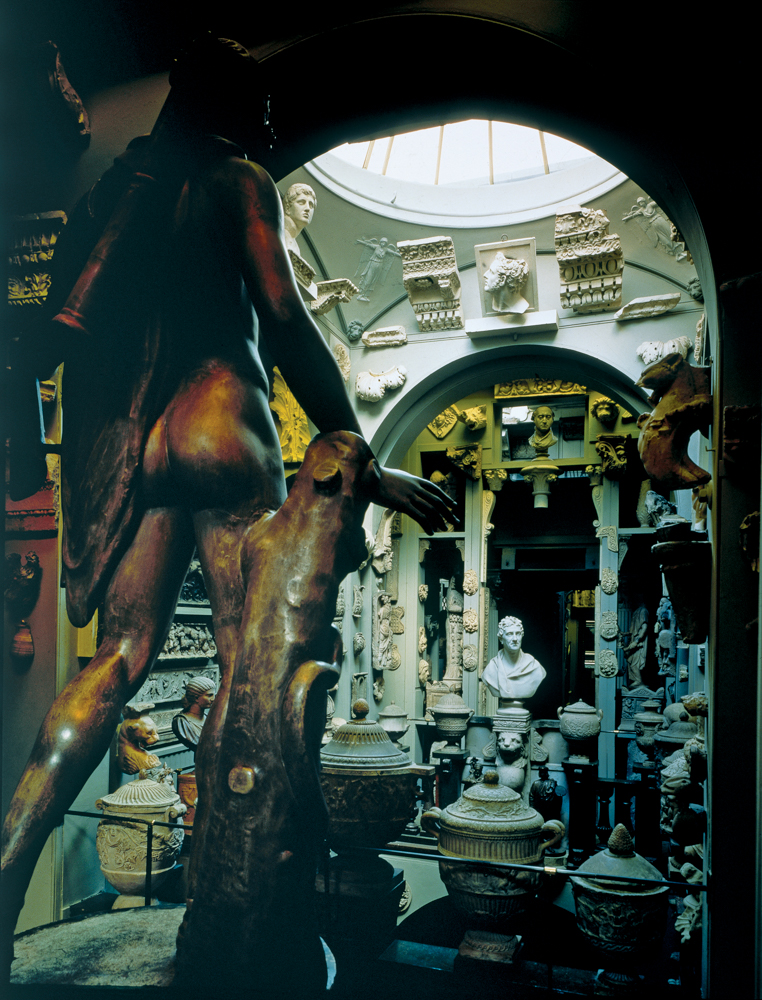 In1833 architect Sir John Soane, owner of the building at 12-14 Lincoln's Inn Fields in London, decided to put an end to the drama which had been going on for years behind the white Portland stone facade decorated with antique sculpture and Gothic consoles.

He disinherited his son George, a spendthrift who was constantly landing in the debtor's prison, and, using his personal contacts, managed to negotiate a private Act of Parliament. It decreed that after Soane's death, his home would be bequeathed to the nation, the only condition being that the interior of the building be maintained as it was.

Four years later, the architect died and London was granted the incredible boon of becoming the owner of one of the most eccentric museums in the universe.

That museum, as well as the Bank of England, are among the few surviving examples of Soane's work. Unlike the building in Threadneedle Street, Soane's bizarre home is known only to a handful of Londoners, even though it was recently put on a new tourist map in the Tube.

Soane was born in 1753 to a bricklayer's family. His ascent in London society began in 1780, on his return from a three-year stay in Italy on a Royal Academy scholarship. His fame, though initially modest, allowed him to marry George Wyatt's niece Elizabeth Smith in 1784 and landed him a commission to design the Bank of England in 1788.

There is not a single record, however, of why he became such a devoted antiquarian. The fashion of the time encouraged people to collect antique marbles, fossils, coins and stuffed animals with equal pleasure - in fact, they amassed anything considered ancient, beautiful or interesting.

In the 1780s, Soane began collecting curiosities, and in 1795 he became a member of the British Society of Antiquaries. Some time earlier, with the inherent practicality which had made him so popular with his wealthy lawyer and merchant clients, he had found a place where he could live and keep his collection.

In 1823-1824 Soane bought and rebuilt No. 14 as well. Until his death, the architect continued to buy curiosities and exhibit them in his home: a real maze cluttered with an Egyptian sarcophagus; Roman, Renaissance and English statues; Chinese porcelain; clocks, barometers and timepieces; furniture, including the maharajah of Mysore's ivory chairs; gems and scarabs; pictures and picture frames; Greek, Roman and Peruvian pottery; Indian miniatures; cinerary urns and tombstones from all over the ancient world; medals; fossils and mummified cats; and nearly 30,000 architectural drawings and prints.

Soane also collected architectural fragments, the most interesting of which are a piece from the frieze on the north portico of the Erechtheion, and the only known surviving stone elements from the 14th Century House of Lords and Prince's Chamber.

Each new major acquisition in Soane's collection was lavishly celebrated. He hosted a three-day party in 1824 when he added the sarcophagus of Seti I to his collection, despite the fact that he had to tear down a wall to get it into the house. Nearly a thousand people, amongst whom were J. M. W. Turner and Samuel Taylor Coleridge, came to view the treasure, which would change its colour from milky white to yellow in the London air.

But what makes the museum remarkable is the way in which the collection is displayed. With stunning extravagance and imagination, Soane employed his favourite architectural tricks in his home: concealed skylights, stained glass and windows, and glittering mirrors which extend the inner space to the confusion of the visitor.

In this labyrinth their vain owner (he changed his real name Swan to Soane and destroyed all the copies he could find of his first book of architectural designs, because he considered their quality derogatory to his reputation) exhibited his entire collection. 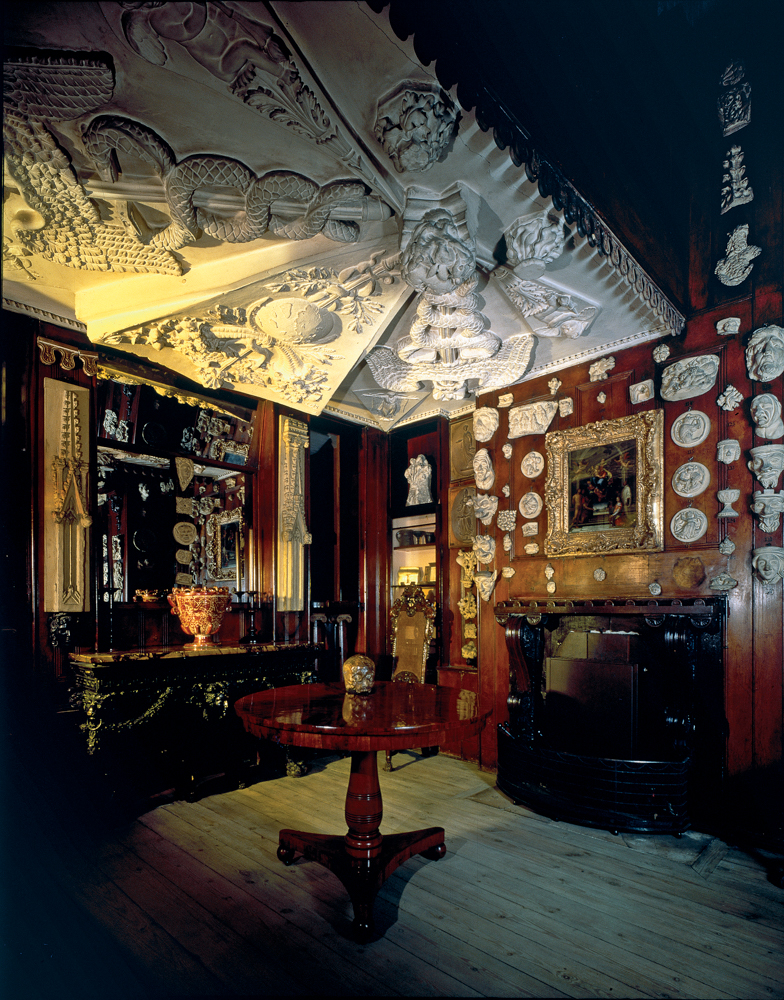 When you enter the first room in the museum, which looks like a normal sitting room, albeit with more mirrors than usual, you can scarcely imagine the cornucopia of delights in store for you as you take your fiirst steps along the corridor.

The walls are barely visible behind the architectural fragments hanging there. Two windows overlook Monument Court and Monk's Yard with their clashing architectural styles, the one Classical, the other Gothic.

Soane's idea was to combine the typical features of the two styles, both for his own aesthetic pleasure and with a pedagogical aim in mind.

When he became a professor of architecture at the Royal Academy, he allowed his students to visit his home to view his collection and read the books in his extensive library.

The small Picture Room looks rather humble at first, but this is only until more visitors gather there. Then the custodian opens the panels covering the walls to reveal over 100 drawings and paintings, among which are several by Piranesi, three masterpieces by Canaletto, Hogarth's satirical series The Rake's Progress and The Election, some of the owner's own architectural drawings, and Sir Richard Westmacott's nude statue of a nymph.

The reason for this unusual design feature was a sensitive lady visitor who complained about the explicitness of Hogarth's art. As a result, Soane devised the concealing screens and displayed the paintings only to male visitors.

From there, you descend the sombre steps to the basement. After seeing the eerie Crypt Room with the tombstones and alabaster sarcophagus, visit Padre Giovanni's grave in the Gothic Monk's Yard. This is a real grave, but as the epitaph "Alas! Poor Fanny!" on the headstone indicates, it does not contain the remains of the monk, who was actually a fiictitious character invented by Soane, but of his wife's beloved lap dog.

The architect did not always have such a frivolous attitude to death. The wall on the left of the stairs in the Crypt Room conceals a niche linking this grim chamber to the well-lit ground floor. It contains a memorial plaque to his wife Elizabeth, who died in 1815.

Soane had a remarkable career, but his family life was far from happy. After his wife's death he christened his home the "Mansion of Woe". This is where he sought consolation from his disappointment with his two sons, who refused to share his passion for architecture. His elder son, John, died in 1826 at 36 and Soane fell out with George to such an extent that he was said to have tried to decline the knighthood he received in 1831 in order that his son might not inherit anything from him.

But, as a picture in the breakfast parlour shows, Sir John managed to treat grief with self-irony. The canvas on the easel depicts the architect's family having dinner in the same room. Everything is the same: the furniture, the delicate trompe l'oeil ceiling painted to resemble a trellis covered with honeysuckle and columbine blossoms, and Mrs Soane's tea set. "Here are the servants," visitors might observe while surveying the servile figures of two young men approaching the master's table.

"Oh, no, these are Sir John's sons! Their portraits are in the living quarters on the second floor," the custodian explains.

Whether this effect was a result of the artist's ineptness or whether it covertly expresses the architect's attitude to his children, it is hard to tell.

Perhaps the answer lies in the subsequent deeds of the disinherited George, who enthusiastically ridiculed the buildings his father had designed in various newspaper articles. Poor boy!

How to get there

Sir John Soane's Museum is located at 13 Lincoln's Inn Fields, London, WC2A 3BP, a short walk from Holborn Tube station on the Central line. Entrance is free of charge. Opening times: Tuesday to Saturday inclusive, 10am-5pm.
The Museum will be closed 24-27 December. Group bookings: All groups of over six people must book in advance.
phone: +44 (0) 20 7405 2107; www.soane.org